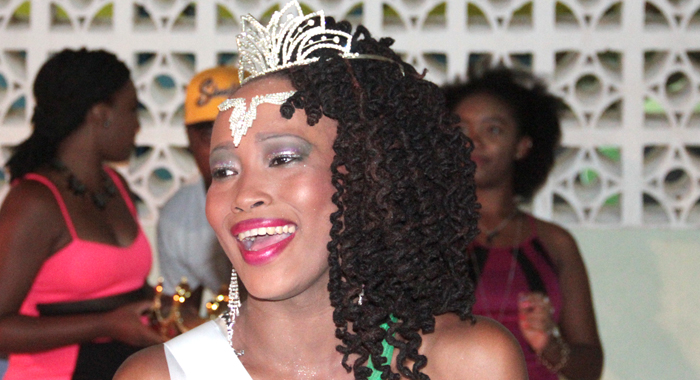 A 24-year-old mother of a “beautiful little girl” defeated four other contenders, including three other mothers, to win the Miss OSCO 2015 Phenomenal Woman crown in Owia Friday night.

“It feels great because I worked really hard for,” Shellicia Small, Miss Confident, told I-Witness News shortly after her crowing.

“I got a lot of push from people. A lot of people encouraged me and then I just took a brave mind, because I have never entered a pageant before,” said Small, who also won the Swimwear and Interview segments of the show.

One of her interview questions was about whether young mothers should be allowed to compete in beauty pageants.

“Being a young mother shouldn’t stop you from entering a beauty pageant,” said Small, who has a 2-year-old daughter.

“A beauty pageant is where someone showcases their talent. It also helps to build someone’s self-esteem and also their self-confidence. So, therefore, as a young mother taking part in a pageant, we all should use this opportunity as a stepping-stone to achieve certain goals in life.

“To me, personally, I will use this opportunity here tonight to better myself. I thank you,” Small, a bartender and secondary school graduate said to loud cheers from the crowd.

The pageant, organised by the Owia Sports and Cultural Organisation, came at the end of a week in which the Carnival Development Corporation said that it thinks the rule that bars mothers from competing in the Miss SVG pageant should stay in place.

Small disagreed, saying, “I am young, yes, but I made a mistake. I don’t regret my daughter, but I had her at an early age. I don’t think it’s affecting me now,” she said, adding that the victory Friday night “might boost me up a little more” to enter other pageants.

The show was not a young mothers’ pageant, but organisers did not give consideration to whether the contestants were mothers.

Lavia greatly reduced her chance at the crown when she fumbled a question about how she would describe herself to a stranger.

The other contestants were Iesha Nanton, Miss Courageous, and Cherissa Nero, Miss Ambitious.

A youngster who impersonated Vincentian soca star Skinny Fabulous won this segment of the show.

The events were part of carnival celebration in Owia, which also included J’ouvert and a river lime later on Saturday.