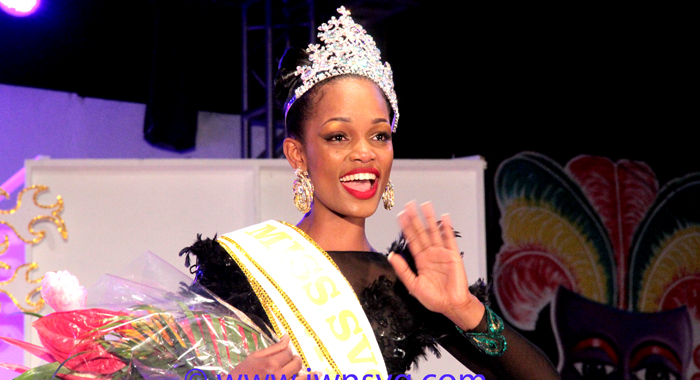 Sixteen years later, in 2015, Baptiste, now one of St. Vincent and the Grenadines’ most accomplished fashion designers, would agree to chaperone Mayers, who had decided to enter the Miss SVG pageant.

Baptiste, undaunted by the potential she saw in Mayers and with no regard for preserving her own historic win, had a challenge for Mayers: break the 16-year stretch since Baptiste made a clean sweep of the Miss SVG pageant.

“I am ecstatic. I have won a university scholarship and next year I will be pursuing studies in Jamaica, hopefully,” Mayers told I-Witness News Saturday night after being crowned Miss SVG 2015, having bagged every judged category of the show.

The emphasis of her response to the question about how she feels about winning the pageant shows Mayers’ true motivation for entering the pageant.

“I wanted to make Mommy proud; I needed to win that scholarship. I obviously wanted to make my team proud because they have worked really heard with me,” she told I-Witness News.

De Yonté’s mother, Verene Mayers, having raised a winner, was not surprised by her daughter’s victory.

“She’s born a winner. From small she excels at everything she does so I expected her to excel,” the mother told I-Witness News.

De Yonté is a graduate of Division of Arts, Sciences and General Studies of the St Vincent and the Grenadines Community College who hopes to pursue a career in medicine.

With her victory, she has won an EC$80,000 university scholarship from the government of St. Vincent and the Grenadines, EC$8,000 in cash from the Carnival Development Corporation and gifts from business houses.

“I need it (the scholarship), because I’m sure you’ve heard by now that I am not from a very well-off family and I need to go to university, because I want to become a doctor and Miss SVG is gonna help me to do that,” Mayers told I-Witness News.

Mayers said she came into the show “confident that I knew what I had to do in each category.

“But the show is won on the night and I was competing against seven other girls. I wasn’t over-confident and I just put my best foot forward. I’m pretty sure that my chaperon was shaking her head because as soon as I came off after each category, I would be like, ‘Kimon, I didn’t do as well as I could have.’ and she would be like ‘De Yonte, no; you did well.’ I am happy that I won,” Mayers told I-Witness News in the post-show interview.

She said it felt “awesome” to have won every category of the pageant.

“When we started training, my chaperon challenged me to do what she did in 1999, what no other contestant has done since, and I am happy that I did.”

Click for more photos of the talent segment of the show.

The presentation was effective not only because of the professional quality of the multimedia, but also because of Mayers’ perfect execution of her parts — marrying technology with human talent.

It was a talent presentation of the sort that the Miss SVG pageant had not seen in a very long time, if ever before.

Mayers’ evening gown, “Phantom of the Opera”, a Kimon Baptiste design, signified the world of the opera.

The “opulent” evening gown was “festooned with feathers, silk and sequent jewel”.

“Her exaggerated persona is brought to life as the colours employed include gold, green and black,” the description of the dress said.

Click for more photos from the evening wear segment.

In the interview segment, contestants were asked two questions, one of which was based on their biography, and a general question, picked randomly from those in envelopes in a basket.

In the interview segment, contestants were asked two questions, one of which was based on their biography, and a general question, picked randomly from those in envelopes in a basket.

In her biography Mayers said she has an interest in contributing to the treatment of cancer in St. Vincent and the Grenadines.

She was asked what are some of the way she plans to do this.

“I plan to become an oncologist when I finish my studies. My father died of cancer when I was seven. That is my motivation,” Mayers responded. “As an oncologist, I plan to take St. Vincent into the new age of cancer research and cancer therapy because I want my country to just move forward and to grow in every way,” she continued.

Mayers was also asked, “Social media has become quite popular all over the world. What, in your opinion, are some of the advantages and disadvantages of social media?”

“So, I can tell you honestly that some of the advantages of social media are that you can communicate faster and more efficiently with your friends and family who are abroad. You can also market things easier, for example, we can market St. Vincent … on Facebook or Instagram. Some disadvantages, however, are the fact that what you post on the Internet often lasts forever. So if a person posts something that is detrimental to their reputation, it can affect them negatively in their future,” she said in response to the question.

The production of Saturday’s show, showed that the Carnival Development Corporation had placed much emphasis on the production of a smooth-flowing event, which was broadcast live to audiences in St. Vincent and the Grenadines (pay-per-view) and free to FLOW cable subscribers in several Caribbean countries.

The staggering of the talent performance, and not in alphabetical order as the contestant appeared in the other segment of the pageant, did well to cushion what could have otherwise been a boring and unimaginative segment.

The talent and interview segments, however, for yet another year demonstrated that while poise and grace can be acquired in a few months or feigned for a few hours, the tree of eloquence flowers after many years of being fertilised with copious doses of reading and attention to current affairs.

Some of the contestants fumbled what many patrons agreed were questions that they could have easily batted out of Victoria Park, if they had been paying attention to current affairs developments locally, regionally, or internationally.

With the Miss SVG crown, Mayers has also won the right to represent the country at the Miss Carival pageant on July 3, where she will compete against several regional delegates.

“You can expect me to try really, really hard to bring the crown home where it belongs, because I want St. Vincent to win Miss Carival and I am going to try to do that,” she told I-Witness News.

Saturday’s show included guest performances from local acts, and a less than phenomenal appearance from featured artiste Trinidadian soca artiste Rodney “Benjai” Le Blanc that had some patrons wondering if he would be paid for the performance.