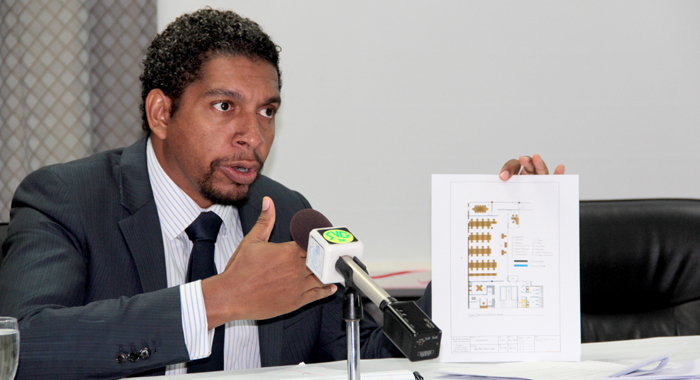 Minister of Technology Sen. Camillo Gonsalves holds up the floor plan of the call centre that Digicel will open in SVG. (IWN photo)

Telecommunication provider Digicel will open a call centre in St. Vincent and the Grenadines this year, Minister of Technology Sen. Camillo Gonsalves has announced.

“In the outset, it will employ about 50 employees. Forty to forty-five of those employees will be local. And it will have a telesales focus in its initial operations. They have shared with me the floor plan of the facility and they are going to have a shift system,” Gonsalves told a press conference on Friday.

He said he was not sure, however, how many shifts will be in operation at the centre, but said it will be more than the regular 8 a.m. to 4 p.m. hours of operation.

“They’ve told me about the location, they’ve given me a sense of the type of training that they are going to give local employees, the salary range they are thinking about and the like, but I don’t want to go too far into it, except to say that the call centre which we discussed is on its way,” Gonsalves said, adding that Digicel will have a press briefing about the call centre soon.