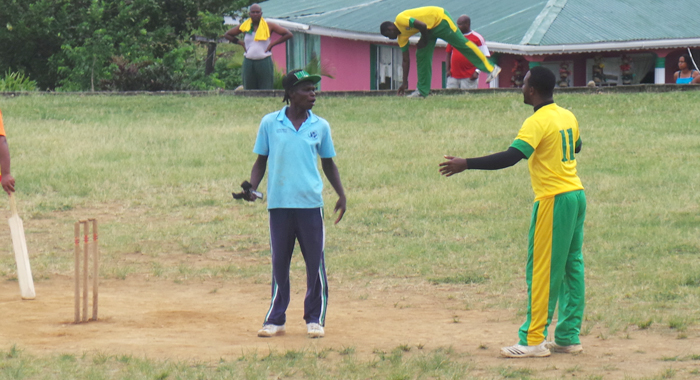 Umpire and player in heated discussion.

Country Meet Town Outa Trouble 1, were forced to play two matches on Sunday after having to take on Dr. Thomas Injectors in the last quarter-final match in the morning — a match postponed at their request the previous weekend.

In that match, Outa Trouble ONE batted first and made 128/9 in their 20 overs with Ozni Billingy getting a topscore of 33 with four sixes and two fours. Ron Adams got 3/25 and Emil Small 3/28 bowling for Dr. Thomas Injectors.

Dr. Thomas Injectors failed to find the right vein and were dismissed for 75 in 18.2 overs with Julian Danzel taking 5/11 in his four overs.

Losing the toss and being asked to bat, Nice Radio Clinchers never got into the game and struggled along, with only Okeiph Andrews with 23 showing any fight. He struck 3 sixes and 1 four.

Simple Boyz never looked in any trouble getting the target despite losing the wicket of top batsman, Desron “Flounkes” Maloney for 13 early in the innings. They achieved the victory in 11.1 overs ending 73/2 with Stein Joseph unbeaten on 36 with 5 sixes and Elric Morris on 16.

In the other Semi-final match, Country Meet Town Outa Trouble, not for the first time in the tournament, brought the game into disrepute with behaviour that left the organisers disappointed and annoyed.

The matter came to a head when the player was asked by the umpire to leave the field. This action resulted in the players becoming even more vocal and abusive in their language as they urged one of the extra players to replace the disciplined player on the field even though the umpires told them that it was not possible. The substitute did not enter the field.

The arguments continued but the umpires ignored the many calls by the spectators to abandon the match, which ended with Sion Hill Tallawahs, who were never in the hunt, ending some distance behind their target.

Country Meet Town Outa Trouble batted first and rushed to 160/2 in their 20 overs with Randy Lawrence and Ozni Billingy featuring in an unbroken century stand for the third wicket.

Sion Hill Tallawahs, who had won over the spectators with their style of play and confidence during the tournament, were up against it from early after losing a wicket in their first over and thereafter found the going tough.

It took a counter-attacking innings late in the piece from captain Shamic Roberts (56) to generate some life in the chase but even that was just more drama than reality.

He struck 8 sixes but even as he created some anxious moments for Outa Trouble 1, he failed to find a willing partner at the other end.

The final and third place will take place on June 14 at the Richland Park Oval, to be followed by the closing ceremony.