Fisherman of the Year on drug charge 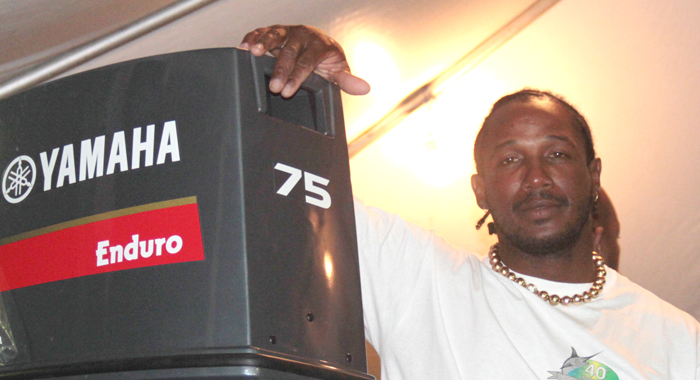 Fisherman of the Year Ray Anthony Clarke poses with his prize on may 25, 2015. He is now on a drug possession charge. (IWN photo)

Fisherman of the Year 2015 Ray Anthony Clarke, who was last week celebrated in Parliament for his exploits at seas, is now on EC$40,000 bail after he was arrested and slapped with a drug possession charge.

Police arrested the 31-year-old Green Hill man on Monday and charged with having in his possession 2,561 grammes (5.645 lbs) of cannabis, a controlled drug, with intent to supply it to another at Kingstown on June 1.

He is slated to reappear in court in July.

Clarke won the Fisherman of the Year title on May 25, having battled the odds, including Sargassum (free-floating seaweed), to land 3,111.8 pounds of fish over the six Mondays of competition.

His prizes included one 75-horse power Yamaha two-stroke engine, one trophy, three life jackets, one case of outboard oil, one umbrella, one set of table mats, one box of Maggi Fish Seasoning.

“It’s overwhelming,” he told I-Witness News after being announced the winner at the 40th annual Fisherman’s Day celebration at Calliaqua.

“I knew I was going to do it because I put my all into it, I did the best I can and nothing beats the best,” he said.

Speaking in Parliament on Thursday, minister of Fisheries Saboto Caesar congratulated Clarke on his victory, noting that he is a graduate of the St. Vincent Grammar School and the Community College.

“It goes to show that the youth among us, the young people in country, that they are becoming involved, very much so, in the productive sectors of the country,” Caesar said.

One reply on “Fisherman of the Year on drug charge”