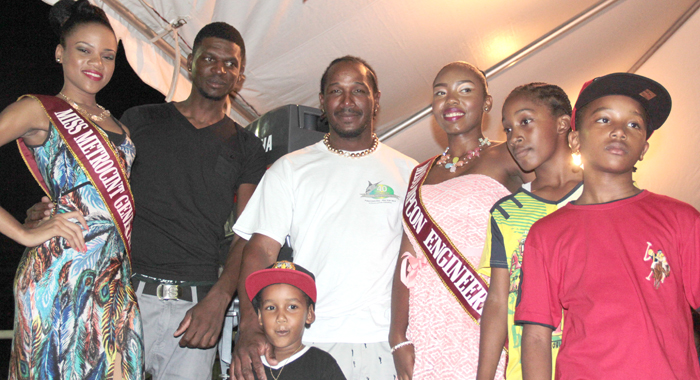 Fisherman of the Year 2015 Ray Anthony Clarke , centre, along with his children, crew member and Miss SVG contestants. (IWN photo)

A 31-year-old Green Hill resident battled the odds, including Sargassum (free-floating seaweed), to become Fisherman of the Year 2015.

Ray Anthony Clarke copped the prize on Monday, having landed 3,111.8 pounds of fish over the six Mondays of competition.

He will receive one 75-horse power Yamaha two-stroke engine, one trophy, three life jackets, one case of outboard oil, one umbrella, one set of table mats, one box of Maggi Fish Seasoning

“It’s overwhelming,” he told I-Witness News after being announced the winner at the 40th annual Fisherman’s Day celebration at Calliaqua.

“I knew I was going to do it because I put my all into it, I did the best I can and nothing beats the best,” he said.

Clarke told I-Witness News that he got up at 3 a.m. on Monday and left the harbour one hour later.

He and the two other members of his crew travelled 58 miles to the southeast then started to fish.

“Today, it wasn’t as bad on the water but it was very challenging because we have a thing we are facing right now, the seaweed on the water. You can’t catch the fish because you can’t run your line to catch the fish actually,” said Clarke, who has been fishing since 2008, when he bought the boat he used in the competition.

They landed 1,811 pounds of fish and will receive $2000, one fish finder, one marine toolkit, one case of outboard oil, three life jackets, one case of Guinness, two bottles of vodka, one Tuffphone, one umbrella, one set of table mats, and one box of Maggi fish seasoning.

Captain Bernard Dublin and Wilma Tucker, the owner of the boat placed third with 1,430.2 pounds of fish.

They will receive $1,000, one explorer compass, one case of outboard oil, 3 life jackets, two bottles of vodka, one Ttuff phone, one umbrella, one set of table mats, and one set of Maggi Fish Seasoning.

Stanley Bradshaw landed the heaviest catch in Class 1 during the six weeks of competition: 364.25 pounds of fish

He was awarded one 15 horsepower outboard engine, one trophy and one case of oil.