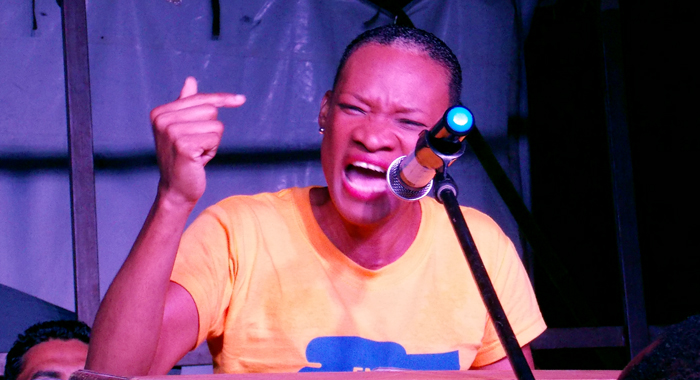 Radio personality Laverne “Gypsy” Phillips on Saturday mounted the platform of the main opposition New Democratic Party (NDP), saying that the ruling Unity Labour Party (ULP) has failed to address the root causes of the challenges affecting the nation’s youth.

“As a competent, self-aware, community loving, country-loving woman who is concerned about the interest of all and not just some, tonight, I am here because I am particularly concerned about our youth, who one day will be the ones taking over this country. But how can they? How can we if they are not empowering us?” Philips said at an NDP meeting in Richland Park on Saturday.

“I stand before you tonight as a right-thinking young lady who over the years has seen very little done to assist the youth in Marriaqua and St. Vincent and the Grenadines on a whole and I am quite certain that as a long as this Unity Labour Party is in office, very little will be done for us,” said Phillips, an announcer at NICE Radio.

“These are the major issues. Yet the ULP isn’t going down to the root of these problems to solve them. This country belongs to us as well. We have to contribute to nation building. We are the next leaders and we need some attention, but, apparently, it doesn’t appear as if this attention will be given to us under the Unity Labour Party,” said Phillips, who originates from Richland Park.

She said that parents have a role to play in addressing the situation by looking out for their children’s future.

“And let me tell you something, there is no graduation in prison; none whatsoever.

“And let me remind you, lest you forget, it was this very same Unity Labour Party government that said in Parliament that the budget was not about creating jobs for young people.

“So you want to tell me that this is a party that supports young people? You have to be crazy.”

Phillips, who holds an undergraduate degree in international business, said the ULP uses its “education revolution” to cause people to think that it cares about the youth.

“But that is not the case. Open your eyes and see what these people are trying to do to us under the guise of love,” she said, even as she said she has “absolutely no problem” with a child being sent to secondary school.

“My problem is when you send a child into secondary school and that child ain’t ready for secondary school. You’re the one who told us that you’re not leaving anybody behind. And when you do that, what exactly are you doing?” she said, adding that there is no extended remedial education in secondary schools to help students.

“In about two years, they are going to throw that student out on your hands, and you, the parents, will have to deal with that child.

“Now, you tell me, a child with no sound education, no means of supporting himself or herself, … no means of satisfying his needs or her needs, isn’t that child likely to turn to a life of crime or even prostitution. If that happens, then you can blame the ULP for them.”

Phillips said that reports of young person being brought before the court for criminal offences are a weekly feature in the newspapers.

“They are the ones who said they are not going to leave us behind. But where can your child be found? Behind bars!” she said.

“This is a prime minister who says that he loves us. But if this is love, I don’t want to see what hatred is,” Phillips, said of Prime Minister Ralph Gonsalves.

She accused the ULP of disrespecting women in St. Vincent and the Grenadines.

“I don’t have to remind anyone here of what the PM was accused of you know. Old people have a saying, in every pound of rumour there is an ounce of truth, and, if you never gotten yourself mixed up in it your name wouldn’t ah call.

“And you know what I find appalling? Is that this country’s deputy Prime minister, who is a woman, who is this constituency representative, was quiet as a lamb on the issue. If anything, she continued to praise the PM. Why didn’t she stand up for us as women? Why couldn’t she do that? And for that, Miss Miguel, I lost all respect for you,” Phillips said of Member of Parliament for Marriaqua, Deputy Prime Minister Giryln Miguel.

Phillips chastised the ULP for its attack on Kate, a victim of abuse who spoke of her experience at an NDP consultation earlier this year.

“But that is what the ULP is good for. They would ridicule, they will tear down, they will criticise, only because they realise that the opposition party, the New Democratic Party, is getting it right and they can’t.”

Phillips portrayed Miguel, who has been representing Marriaqua since 1998, as having failed to represent the interest of the constituency.

She also said that if elected, Jimmy Prince, the ULP’s candidate for Marriaqua in the next general elections, will not be given the resource of improve the district.

“Now, you tell me something. If Mrs. Miguel, who is the Deputy Prime Minister — well then again, that is just the name, because when the PM leave, she can’t do nothing.

“But you know if she is the Deputy Prime Minister and she can’t do it, tell me exactly how Jimmy Prince going do it. Tell me how he going do it?

“The ULP has realised that there is a desire for change not only in Marriaqua but in all St. Vincent and the Grenadines. Let me tell you something. They couldn’t possibly run back Miss Miguel, because not only is it that I believe that she is tired, but I know that the woman has come to the very conclusion that she has disappointed the people of Marriaqua,” she said.

She lauded Prince as an “upstanding” person, and noted that the ULP was hailing him the “Prince of Marriaqua”.

“But you and I know who the real prince is. If PM has himself as the king, then you know who the prince is: Camillo,” Phillips said of Minister of Foreign Affairs, Sen. Camillo Gonsalves — son of PM Gonsalves.

“If Miss Miguel couldn’t do it, Jimmy, you can’t either. So ain’t no way that the people of Marriaqua going to give you their X,” said Phillips, who said that Prince is being used by the ULP.

“We cannot continue like this, brothers and sisters. I have assessed both the NDP and ULP and I would say over and over again that the NDP has a competent team that can move this country forward and offer better hope for the people of Marriaqua and all of St. Vincent.”

She descried as “the real McCoy”, Curtis Bowman, the NDP’s candidate for Marriaqua in the next general election, constitutionally due by March 2016.

She said Bowman is “a pharmacist by profession who will give the right prescription to the constituency of Marriaqua.

She said the ULP knows they are at the end of their rope, and criticised the party for its treatment of businessman Leon “Bigger Bigs” Samuel, whose employees lost their jobs after his mining licences was revoked in 2011.

“Ladies and gentlemen, listen to me: this is an opportunity for Marriaqua to be on the right side of history. Don’t give them another terms. The NDP party says that the tent is big enough for all of us, whether you are ULP, whether you are NDP, every single one of us deserves a slice of the pie. And that, my friend, will only happen, when this New Democratic Party gets into office,” she said, adding change equals opportunity for all.

“So, some election day, follow your prescription so that we can get the right medicine for Marriaqua. Choose wisely and vote Curtis Bowman. It’s time for us to take this country back!” Phillips said.