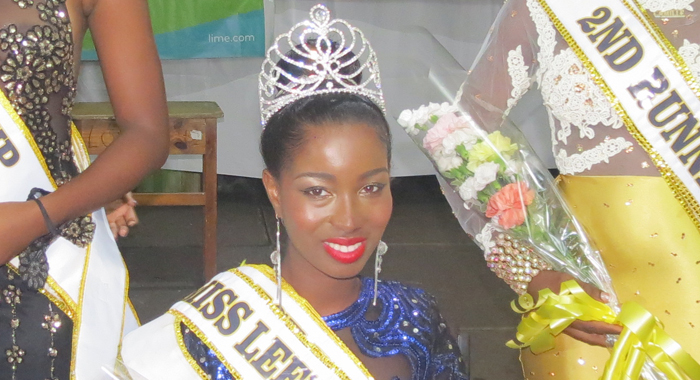 Ashton, a Community College student who appeared as Miss Rose Hall, captured the Best Swimwear, Best Talent and Best Eveningwear title on her way to victory.

In her talent piece, she appeared as an old woman, pursing her lips throughout to create the effect of the speech of a toothless old person as she delivered her monologue, which wooed the audience and judges.

John was asked why she believes that theatre arts should be taught in every primary and secondary school.

She said theatre can boost the confidence of participants as they will be required to perform in front of an audience many times.

The field also expands students’ choices of careers, away from traditional occupations such as doctors, nurses and police officers, she said.

Asked what can be done to foster greater unity among the islands of St. Vincent and the Grenadines, John said ensuring that the opportunities offered to residents of the Grenadines are the same as those in St. Vincent.

She also called for ease of commute among the islands and the implementation of the housing developments in the Grenadines.

John also said that employment opportunities should be spread throughout the country and not only in St. Vincent.

Delivering remarks at the show, Member of Parliament for North Leeward Roland “Patel” Matthews praised the organisers of carnival activities in the constituency, saying that they continue to do a good job.

He said the constituency has been producing contestants for the Miss SVG Pageant and noted that two of the contestants in the national pageant this year were from North Leeward.

The carnival celebration in North Leeward culminated with J’ouvert Saturday morning and a street jump-up in the afternoon.