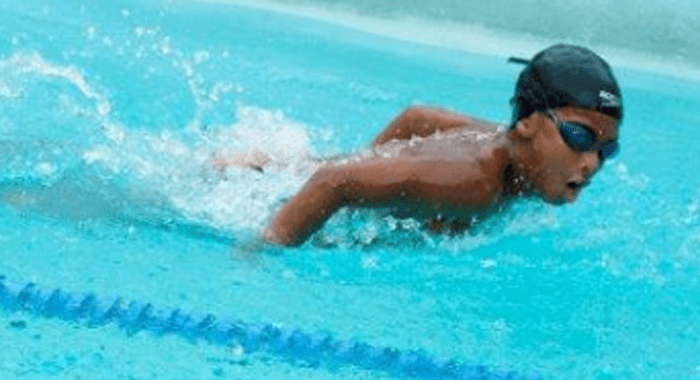 Twenty clubs with over 270 swimmers from the region took part in the event and SVG’s Black Sands swimmers were able to bring home five medals. The clubs was able to send only a small team this year due exam conflicts for most of elite swimmers.

He is setting up to be dominant swimmer next year when he will compete in his final year in the age 11 to 12 category, the club said.

“I am happy to see Alex clearly following in the footsteps of his older sister Shné, who is a current Carifta record holder and the SVG Sports Personality of the Year for 2014,” Black Sands coach Kyle Dougan said.

“Alex is showing that he has the talent and determination to be a top Caribbean swimmer. Alex now seems to be getting ready to join Nikolas Sylvester, Shane Cadogan and Shne as the best swimmers in SVG and among the best in the Caribbean in their respective age categories,” the coach added.

Shné Joachim and Nikolas Sylvester will lead the SVG swimming contingent at the Pan Am Games in Toronto in July 2015. They will be joined by Shane Cadogan at the FINA World Swimming Championships in August in Russia.

Dougan will lead the team at both these championships.

The club said that with the newly renovated six-lane, 25-metre pool at Shrewsbury House almost complete, it hopes to see more swimmers aspiring to being the best and establishing SVG as a dominant force in the sport.