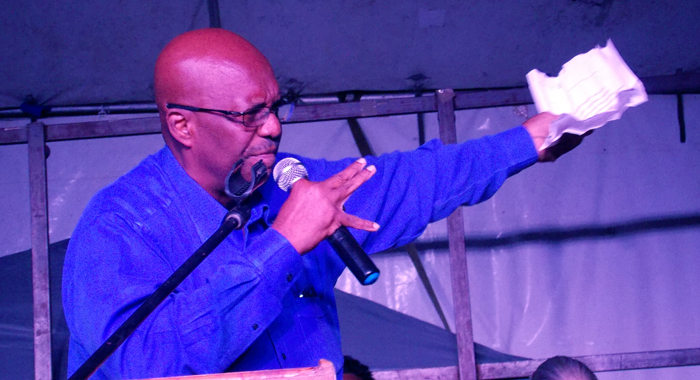 Leader of the Opposition Arnhim Eustace addressing the NDP’s meeting in Richland Park.

Leaders of the Garifuna community in the United States will address a public meeting in Sandy Bay this month, Leader of the Opposition Arnhim Eustace has announced.

The meeting comes on the heels of the announcement by Eustace in New York late May that his New Democratic Party will declare all Garifuna honorary citizens of St. Vincent and the Grenadines if the party wins the next general elections, expected this year, ahead of the March 2016 deadline.

“In a few days, leaders of the Garifuna movement will come to St. Vincent and they will address a public meeting in Garifuna country at Sandy Bay,” Eustace said at an NDP rally in Richland Park on Saturday.

Eustace noted that the Garifuna, descendants of indigenous Vincentians, were exiled from St. Vincent in 1779, but have maintained St. Vincent as their ancestral home.

“There’s is a remarkable story,” he said, noting that the Garifuna language and culture have survived for over 200 years.

“They suffer because they maintain St. Vincent as the homeland. And the United Nations recognises them as an exiled people. And what is remarkable, they have maintained their own language and their own culture for those 218 years, yet remain loyal to this country, to this land here, which they call Yuremein,” he said.

Eustace said the Garifuna are a very spiritual people.

“When they talk about Yurumein, they really, really mean it,” he said and reiterated his commitment to following through on the honorary citizenship proposal.

“I was not joking about that in any way possible. And when the New Democratic party comes to office in St. Vincent and the Grenadines, they, the Garifuna, will be part of us. And there is something else I want to mention in this regard: 800,000 people ain’t no penny people, and therefore, their becoming honorary citizens of St. Vincent and the Grenadines, their linking with us, they are going to impact our economy in a positive way,” said Eustace, an economist.

“Our whole economy is only one hundred and something thousand you know. It is going to be eight times as big. So things like tourism and so on, Garifuna will come here in their thousands. They’re not coming here to stay in their thousands, like what Gonsalves say you know. I think he gone off you know; he gone off,” Eustace said.

Prime Minister Ralph Gonsalves last week opposed the honorary citizenship proposals and suggested that Garifunas will come to St. Vincent and the Grenadines to take over people’s houses and jobs.

“They have their own properties in the United States, in Belize, in Honduras, in Nicaragua, but they are devoted to St. Vincent,” Eustace said.

He said that the United States does not recognise dual citizenship.

“I’m telling you all that now. I have thought this thing through and my colleagues have thought it through. There are still things to work out. I have told them that we will sit down with them and all the things we think must come under honorary citizenship we’ll discuss with them and decide on what the package will be.

“We’re not telling them we want this and we want that. We will come to an agreement with them on what should be included in honorary citizenship,” Eustace said.

The NDP president said that Gonsalves erred in his response to the honorary citizenship proposal.

“But I want to tell Gonsalves he made the worst mistake of his life, worst mistake by saying those people coming here to take away our land and our property. They will never forgive him for that. Their loyalty and commitment to this country is unquestioned and they take that as a deep insult. I have spoken to some of them already, including the man who said on radio the other night that Gonsalves must withdraw what he said. Well, he coming here to talk very soon,” Eustace said.

“When plenty Garifuna come here as tourism, they will provide plenty jobs in tourism too,” he said.