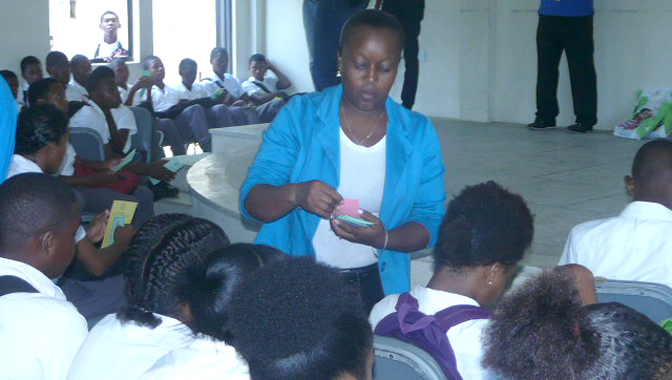 This comes on the heels of the first road show for 2015, which kicked off with a bang on Wednesday.

A caravan including a truck with disc jockey, Delroy “Buku” Dasent, who blasted a number of soca hits for Vincy Mas 2015 left Central Police Station, Kingstown, about 8:45 a.m. on Wednesday and journeyed to Sandy Bay.

Along the journey, Corporal of Police Stephen Billy and Police Constable Colin May appealed on microphone to members of the public to keep Vincy Mas crime free.

“Violence is usually on the increase although the ‘No Bottle Policy’ is in place and should have drastically reduced the incidents of violence. Some Carnival revellers even resort to equipping themselves with weapons when leaving home,” James said.

She noted that guns, cutlasses, knives, scissors, ice picks and screwdrivers are some of the most common weapons used to commit acts of violence in and around Kingstown and the out districts where Carnival activities are held.

Against this backdrop, the Crime Prevention Unit was established to campaign for a “Zero Tolerance Against Crime” paying a close attention to the issue of violence as this seem to be the most common crime committed during the Carnival season.

Additionally, two road shows will be held on June 17 and 19.

During the road shows, visits will be made to some secondary schools on the mainland and presentations made to students on resisting pressures that may come their way to get involved in criminal activities. The Crime Prevention Unit will also hosts two exhibitions on June 26 and July 3 on the sidewalk outside Central Police Station, Kingstown.

“We the members of the Royal St. Vincent and the Grenadines Police Force intend and are prepared to work assiduously towards sending the message to the perpetrators that we will accept no form of criminal activities. We are also sending a strong message that their space to commit crime will be significantly reduced,” James said.

When the caravan stopped at the Sandy Bay Secondary School, the students welcomed the team with exuberance. Brenna May, a first form student of the school won herself an Alcatel One Touch cellular phone courtesy LIME while other students were presented with various types of gifts.