Why anti-gay sentiment remains strong in much of Africa 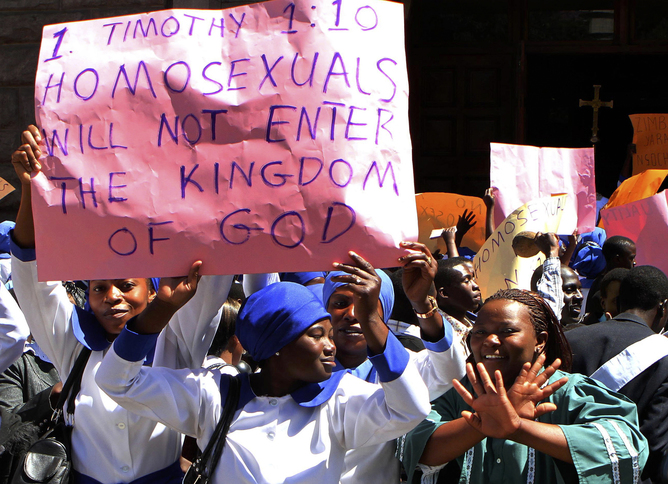 Members of a breakaway faction of the Anglican Church in Zimbabwe protest against homosexuality. (Photo: Reuters)

By Harry Dugmore, Professor and Director of the Centre for Health Journalism at Rhodes University

(DISCLOSURE STATEMENT: Professor Harry Dugmore was the research coordinator and co-author, with the research panel, that produced the Academy of Science South Africa’s report on Diversity in Human Sexuality: Implications for Policy in Africa.)

Of the 76 countries that still criminalise same-sex relationships and behaviour, 38 are African. Recent surveys also show that the overwhelming majority of people who live in Africa strongly disapprove of homosexuality. This is even the case in South Africa, the only country on the continent that has legalised same-sex marriage.

What the science is saying

A report by the Academy of Science of South Africa reviews recent science about human sexuality and sexual orientation and challenges attitudes that are common in many African countries. The report also provides some explanation about the attitudes and laws prevalent in Africa.

It outlines how global science has steadily demonstrated that gay people are not “sick” nor do they have “conditions” needing treatment. This research, from the 1950s to the 1990s in particular, encouraged professional organisations to remove homosexuality from diagnostic manuals.

Contemporary science does not support thinking about sexuality in a “binary opposition” of hetero/homosexual and normal/abnormal. Rather, it favours thinking about a wide range of variations in human sexuality.

The report finds that:

Variation in sexual identities and orientations has always been part of a normal society, [and] there can be no justification for attempts to ‘eliminate’ LGBTI from society.

A growing public appreciation of this new science has been important in shifting public attitudes and laws globally.

The effect of colonialism

An understanding of the moralities that appeared in 19th-century Europe, entailing missionary-driven assaults on African social and sexual customs and practices such as polygamy, and sex before or outside of marriage, is key to unpacking the current state of affairs in Africa.

Dozens of studies show that same-sex practices in pre-colonial Africa were not generally taboo in the way that colonial administrations codified them. Many traditional societies in Africa, and elsewhere, developed ways of ordering and tolerating same-sex attractions and behaviour.

Many tolerated some same-sex relationships among men, particularly in age-related cohorts or military units. Large numbers of men practised some same-sex activities while asserting their heterosexuality in other spheres of life.

Among women, many different African societies record marriage or other kinds of recognised relationships between women, as well as different forms of cross-dressing and role-swapping. These include societies and cultures in Kenya, Sudan, Cameroon, Nigeria, Lesotho, South Africa and many others.

Only during the height of colonisation were precise definitions of sexual orientations developed and proscribed behaviours punished. The British in particular brought in legislation because they thought “native” cultures did not punish “perverse” sex enough.

Like so many other colonial era laws based on Victorian prejudices, these laws should have been repealed as part of the decolonisation process. But, on liberation, most English-speaking colonies did not repeal colonial-era “sodomy” or “crime/vice against nature” laws.

There has been some progress. For example, Mozambique, which celebrates 40 years of independence this month, will officially rescind “vice against nature” legislation in a few weeks time.

But attitudes and laws about homosexuality are not purely a colonial import. Since independence, other factors, including political populism, have driven anti-LGBTI attitudes. More recently, some of the impetus behind new laws has come from conservative and often racist organisations based in the US.

In the last 15 years, the Christian right, primarily charismatic right-wing churches from the US, has been very active in driving anti-homosexuality sentiment in parts of Africa, like Uganda.

These groups have supplied their African allies with discredited junk science to bolster what is ultimately a narrow, imported set of ultra-conservative values. Similarly, the growth of a more conservative set of Islamic customs in some parts of Africa has seen the erosion of indigenous belief systems that have been historically more tolerant of non-heterosexual orientations.

Attempts in Uganda to impose new, tougher laws has drawn global attention and opprobrium. In 2014, President Yoweri Museveni ordered the establishment of a Presidential Scientific Committee on Homosexuality to advise his government on whether on not to pass a controversial anti homosexuality law.

The medical academics involved concluded that:

Despite receiving this report, Museveni signed a law that contained harsh new punishments for “homosexual acts” and for what it calls the “promotion” of homosexuality. Implementation of that law is currently suspended by the Ugandan Constitutional Court.

There are also new laws in Nigeria, homophobic changes to the constitution in Zimbabwe and discussion about possible new laws in a number of countries, including Kenya.

The impact of this type of legislation is severe on LGBTI individuals and communities as well as on public health services.

A particularly dangerous aspect of new laws in some parts of Africa is that they are designed to criminalise those who advocate for LGBTI rights or campaign for better access to public health facilities. This impedes the work of NGOs and activists and wider dissemination of new science about sexual orientation.

The report aims to make recent science more accessible to African policymakers so that policy can be based on good evidence, not social prejudices. Same-sex attraction is neither “un-African” nor a colonial import. Between 350 million and 400 million people globally are not heterosexual, about 50 million of whom live in African countries.

It is time to transform the continent’s laws, and its societies, informed by a rapidly evolving, and ever more convincing, science of sexual orientation.

This article draws from the ASSAf report, which says that 38 African countries have laws that criminalise same-sex relationships. This figure was taken from the 2014 report by the International Lesbian Gay Bisexual Trans and Intersex Association (ILGA). In its 2015 report released in May, the association has revised the number to 35.

This article is part of a series The Conversation Africa is running on issues related to LGBTI in Africa. You can read the rest of the series here.

First published by The Conversation