Mother planning to sue hospital over death of baby 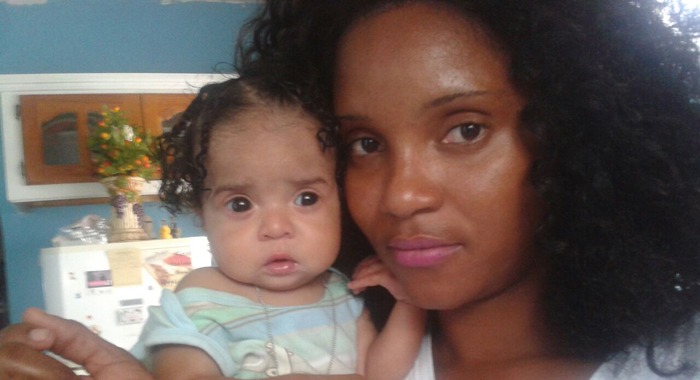 Juanita Harry and her child, Kadrian John, who died at Milton Cato Memorial Hospital on June 5.

A Lower Questelles woman will on Sunday bury her 1-year-old child then begin to seek legal redress in the matter of the death, which occurred at Milton Cato Memorial Hospital on June 5.

The death certificate issued on June 10 after an autopsy said that the child, Kadrian John, died of “acute gastroenteritis of severe dehydration” as a consequence of “sepsis”.

“You don’t expect a child to die from that at a hospital, where there are a lot of nurses and doctors,” the child’s mother, Juanita Harry, originally of Rose Bank, told I-Witness News of the severe dehydration.

Sepsis is a potentially life-threatening complication of an infection. It occurs when chemicals released into the bloodstream to fight the infection trigger inflammatory responses throughout the body. This inflammation can trigger a cascade of changes that can damage multiple organ systems, causing them to fail.

The death certificate also said “severe metabolic acidosis” was a morbid condition contributing to sepsis and acute gastroenteritis of severe dehydration, but did not give rise to them.

Also contributing to death was congenital adrenal hyperplasia (CAH), but this was not related to the disease or condition causing death, the certificate said.

CAH is the name given to a group of inherited disorders of the adrenal gland.

Most of these conditions involve excessive or deficient production of sex steroids and can alter development of primary or secondary sex characteristics in some affected infants, children, or adults.

In John’s case, it was manifested in what appeared to be a penis, but which doctors said may in fact have been an enlarged clitoris.

Further tests were needed to confirm if this was the case, Harry told I-Witness News.

She said that Kadrian was admitted on June 1, when he was taken to do a test to see if his electrolytes were in balance.

“Normally, he has an imbalance. Sometimes, his sodium will go down,” she said, adding that the child had been hospitalised three times before for similar reasons.

“He didn’t have anything, he went in normal. Just that they had to build,” she told I-Witness News, referring to the imbalance.

Harry told I-Witness News that doctors told her that they needed to perform a CT scan on the child to try to determine if he had ovaries.

She said the child had to be sedated for the procedure.

“When he was there on Wednesday (June 3), he picked up a bug, which is vomiting and diarrhoea because other children were in there with the same condition,” she said.

Harry said she later realised that when the doctor came the following day, he had instructed the nursing staff to change the IV fluid that the child was being given.

She said she realised this on June 5 (Friday) when the doctor inquired about why the type of solution the child was being given intravenously had not been changed.

“And while I was in there, this other doctor came in and said, ‘I told the nurse to change the child’s IV. Why didn’t she change the IV?’

“They shaved his head. There was no vein,” Harry said.

“And then they still have the heart to put it on the [death certificate] to say the child died from severe dehydration.

“In a hospital full of nurses,” the mother told I-Witness News.

She said Kadrian was never hospitalised because of vomiting and diarrhoea.

“I would like my story to be shared so that people can see what is going on at the hospital. I am going to fight. I don’t know if I am going to get through, but it is worth a try,” Harry told I-Witness News.

“I wanna sue because this is not right. When I went there, I didn’t expect to come home without a child and even the doctors can tell me that they did not expect Kadrian to die because they did not leave him in any condition to die,” she said.

“When I see my child start to change colour, I know definitely that my child was going to die. He was clear (fair) and then his colour started to turn blue.

“I watched my son die before my eyes,” she said of the child who turned 1 on May 12.

“He just barely make it to a year. There [was] nowhere I [went] without this child and because of that, when people see me now, they keep asking ‘Where’s the baby?’” said Harry, who has four other children.

Harry told I-Witness News that on June 3, when Kadrian started to vomit, the nursing staff told her not to feed him.

She said he later started to vomit blood, and the nurses told her that his stomach was contracting because he had vomited so much.

She, however, said that some of the nurses were devastated by his death.

“There are a few nurses that worked with him from since he was a month, I watched them in tears,” Harry told I-Witness News, and recounted how a local paediatrician had told a conference of hospital staff about the need to pay close attention to the child.

“She said this child is a serious child. You don’t lapse when it comes to this child,” Harry told I-Witness News, quoting the paediatrician.

“After I bury my son, I am taking all of his documents to see a lawyer because I cannot deal with this. Right now, I sit down here I can’t even help myself because every time I get up to do something I keep sitting back,” she told I-Witness News.

Hospital officials say that they are looking into the death of the child.