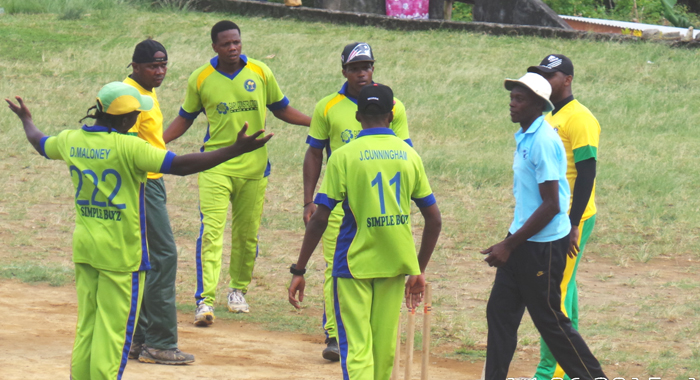 Their behaviour, though, in the presence of the tournament sponsors, proved to be the talking point, rather than their triumph.

The sheen was, however, taken off the win owing to the poor behaviour displayed the Simple Boyz team in disputing an umpire decision while fielding.

The incident in question occurred when a ball delivered down the leg-side and rightly called wide was collected by wicketkeeper, Stein Joseph, who effected what the fielding team claimed was a stumping.

The square-leg umpire turned down the decision and this incensed the Simple Boyz players most of whom marched over to the umpire and began shouting and showing open dissent, all this in front of the tournament sponsors and carried live on radio and recorded by television camera.

While the questionable behaviour continued for a few minutes, Desron Maloney of Simple Boyz, was seen removing the bails and dropping them onto the ground.

When told about his team’s behaviour in front of the tournament sponsors, Maloney replied, “They are not our sponsors so we don’t care”.

And as was the case with the matter involving Country Meet Town Outa Trouble two weeks ago, the spectators shouted to the umpires to “call off the match” but they ignored these calls and resumed the match.

The issue was subsequently addressed during the closing ceremony by Israel Bruce who was acting as MC for the evening.

Bruce, who is the interim chairman of the SVG Softball Association, warned the players that they would not be allowed to misbehave in one tournament, be banned, then move onto another tournament.

“No, that will never happen. If you are found to have brought the game into disrepute in one tournament, you will be banned from every tournament, so take heed,” Bruce said.

In their speeches, President of the SVG Police Co-operative Credit Union Junior Simmons and vice-president of Clinchers Sports Club, Rohan Giles both addressed the issue of ill-discipline.

In the match, winning the toss and choosing to bowl, Simple Boyz kept their opponents in check with tight and steady bowling with Eldon Morris (2/7) and Kentish Phillips (2/6) leading the way. Captain Javed Harry hit 3 sixes and 1 four in his topscore of 26* for Outa Trouble.

Gairy Construction Simple Boyz approached the target confidently and despite losing Maloney (15) with the score on 43, went about things at a gallop — needing a little over 8 overs to get home with Jabbari Cunningham leading the chase with an unbeaten 44, which included 6 sixes as they ended 73/1. He was named MVP of the final.

The third place play-off turned out to be a low-scoring, but exciting affair with Sion Hill Tallawahs getting past Nice Radio Clinchers by 2 wickets.

Batting first, Nice Radio Clinchers were dismissed for 38 in 19.4 overs with Collin Williams taking 3/7 and Kerwin Williams 2/2. Sion Hill Tallawahs were made to fight for every run and in the end got to 39/8 in 16 overs with Okeiph Andrews taking three for four and Rajiv Roberts 2/13.

The final was followed by the presentation ceremony at which the top performers were rewarded, after short addresses by representatives of the sponsors and organisers.

A total of 21 teams took part in the fourth edition of the tournament.