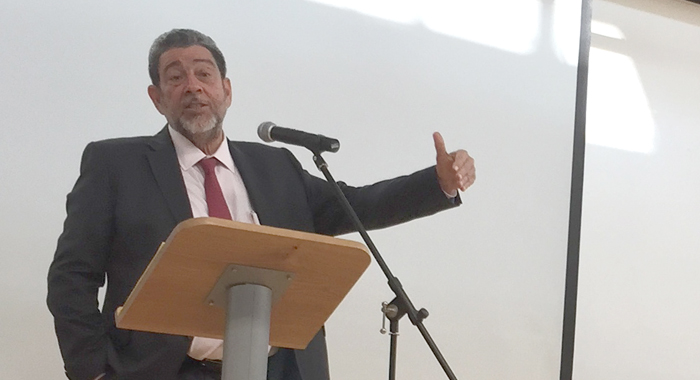 READING, United Kingdom: Prime Minister of St. Vincent and the Grenadines Ralph Gonsalves addressed the Vincentian diaspora in this British town on developments in SVG, at The Avenue School in Reading, followed by a question and answer session on SVG’s challenges and key areas of development.

This meeting follows his official visits to Brussels and Rome earlier in the week.

Avenue School in Reading caters for children with special needs and is twinned with its counterpart – Sunshine School in Bequia.

The event was organised by the High Commission for SVG in London and the SVG Reading Association.

The meeting was also attended by Gonsalves’ wife, Eloise; Christopher Stange, Honorary Consul for SVG to Northern Ireland, nationals and the respective chairs of the various SVG UK National Associations.

Gonsalves explained to the packed audience the government’s commitment in building a modern, multi-sided, post-colonial economy on a national, regional and international level defined by the Government’s National Economic and Social Development Plan 2013-2025. He encouraged everyone to read the document, which is available on the SVG Government’s website.

“Underlying this Development Plan is a vision, philosophy, a strategic economic outlook, a good governance framework, and a quest to ennoble, further, in material and non-material respects, the Vincentian component of our Caribbean civilisation,” he said.

He told the audience that significant advancements have been made across all sectors, including the passing of new policies, public health, housing, education and wellness revolution, fuel and water storage facilities, promotion of youth to fill the country’s technical requirements, scholarships, roads and bridges, agricultural diversification, sustainable energy, as well as.

Gonsalves also provided updates on Argyle International Airport, which he said is nearing completion, adding that the airport will not only improve infrastructure and accessibility but also provide immense employment and ancillary benefits.

The Prime Minister highlighted the huge role Vincentians play, not only at home but also globally in the social and economic development of the SVG economy, remittances and assisting the government as a team in its efforts in creating a better society for all Vincentians.

One reply on “PM Gonsalves addresses Vincentians in Reading”