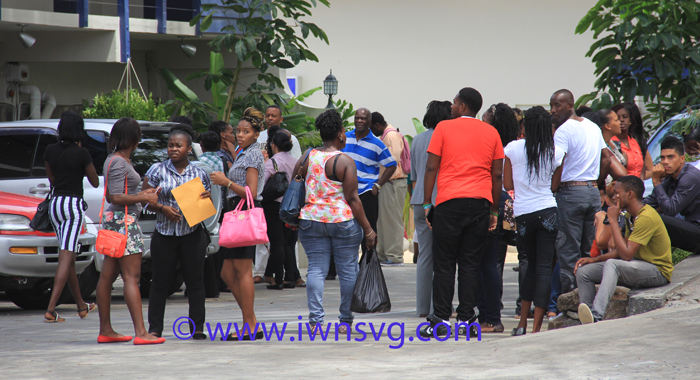 Jobseekers await interviews at the open call for vacancies for KFC in June. A survey has found that 58 per cent of Vincentians are concerned about employment. (IWN photo)

A Community College graduate with passes in law and sociology, a former secretary at a primary school, a 35-year-old father, and a former employee unsure of her severance pay were among the hundreds of persons who turned at the “open call for vacancies” by the new KFC franchise holders on Tuesday.

The franchise holders, Tessa and Kelly Glass, have not commented on the number of persons who actually turned out to seek employment, but I-Witness News was told that at least 350 persons were given numbers for interviews.

“I am here because I am seeking employment. The country is very hard and I need some kind of job because I have children to maintain and my life also,” a 26-year-old mother of two children, ages, 6 and 4, told I-Witness News while she waited her interview at Blue Lagoon Hotel in Ratho Mill.

The Green Hill resident, a graduate of the St. Joseph’s Convent Kingstown and the St. Vincent and the Grenadines Community College, where she studied law and sociology, told I-Witness News that she last worked in March of this year, taking care of an elderly person under private arrangements.

Asked why she, as a college graduate with her qualification, want to work at a fast food restaurant, the woman told I-Witness News, “Yes, I may have my education but the country’s economy is not nice and I need some kind of employment in order to make it in this country.

“I need some kind of employment in order to make it in this life. I have my children to mind. They are going to school,” she said.

A 24-year-old female resident of New Prospect told I-Witness News that she went straight into the workforce after graduating New Adelphi Secondary School.

The mother of a 5-year-old son has worked as a secretary at a primary school and has had several jobs in the hotel industry.

Among the persons who were successful in getting an interview was a 27-year-old Redemption Sharpes resident who worked with KFC for four years before it went into receivership in March.

She told I-Witness News that she has not received severance pay after the closure of the restaurant, which was then under the management of then franchise holder Ken Boyea and St. Clair Investments.

“Up to now, no call. Nobody is telling us anything,” she told I-Witness News.

“Seeing that a new company has taken over, that means that the assets have already been sold, as they say. But we are still having no communication with anybody. It’s like nobody don’t care about us,” she said.

The woman was, however, optimistic that she will be among those chosen to work when KFC reopens.

“I am confident. I know myself. And if the job includes KFC, I know my whereabouts in KFC. You blindfold me and put me in KFC, I know what to do,” she said.

But a 35-year-old father of Riley was too late get a number for an interview when he arrived.

He told I-Witness News that he has a 2-year-old son and has been unemployed for about two years now.

The man, who is originally from Chateaubelair, told I-Witness News that he graduated from the Petit Bordel Secondary School.

“I wasn’t the brightest, but I graduated secondary school,” he said.

Asked his opinion of the unemployment situation in St. Vincent and the Grenadines, he told I-Witness News, “To put it frankly, it’s terrible.”

He said the KFC officials told him that they had already given out 350 names when he arrived.

“They took my name and number and they say they have other interviews to do and in case of anything they will give us a call.”

The man was hoping for a job as a security guard

“That is the first thing I put. And if anything else arises, once it’s employment, I am willing to do it,” he told I-Witness News.

24 replies on “College grads among hundreds seeking jobs at KFC”