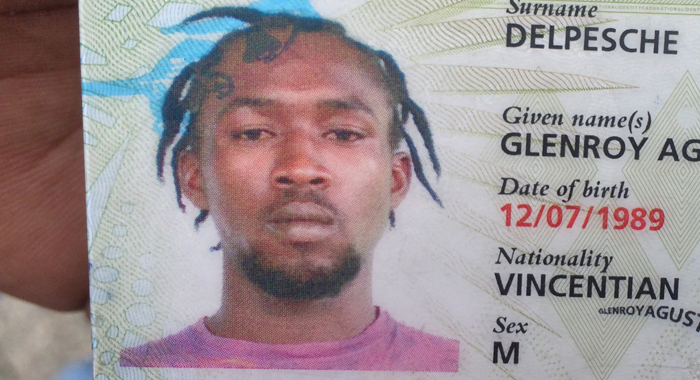 Glenroy Delpesche, one of the men whose body was found in Trois Loups on Thursday. (IWN photo)

Chateaubelair residents Mathias “Chubby” Myers and Dominic Pipe found Delpesche’s body on the seafloor as they were spearfishing in Trois Loups Bay, an area accessible only by boat some two miles north of Richmond Bay.

Batiste’s body was found on the rocks some distance away, where it seemed to have been deposited by the sea when the tide was higher, his uncle, Alvin Westfield, who was among the men who found the bodies, told I-Witness News.

The body was laying face down on the seafloor some 60 under water, Pipe told I-Witness News.

It was clad in short pants, and had a black tam on the head.

Pipe also told I-Witness News that Baptiste’s body was nude, but did not seem to have any injuries besides those seemingly inflicted when it came into contact with the rocky shore.

Baptiste’s common law wife, Lena Hutchinson said she last saw him Tuesday morning around 7:20 when he said he was going to Trois Loups to fish.

She said he did not say who he was going with.

Hutchinson became concerned when he did not return Tuesday night.

Hutchinson said she filed a missing person report with the Chateaubelair Police Station on Wednesday.

She said she received a call on Thursday saying that her partner had been found dead.

Westfield told I-Witness News that about eight persons made the trip to Trois Loup on a boat on Thursday.

He said that while they went primarily to fish, they had heard reports that his nephew and other members of the constituency were unaccounted for since Tuesday.

“We decided to make a patrol on the rock side when we have the two divers in the water,” he said, adding that it was during this time that Baptiste’s body was found on the rock.

There are conflicting reports about what might have happened to the men, with some residents saying that there was a shootout in the area.

Some say that the shootout involved law enforcement agents, but a police source, who asked not to quoted, said the police has no information in this regard.

Others say that the men may have fallen victim to a drug deal gone sour, and one of the men drowned when he jumped overboard while wearing water boots.

A third North Leeward resident who is said to have also gone fishing with the two men on Tuesday is also said to be unaccounted for.