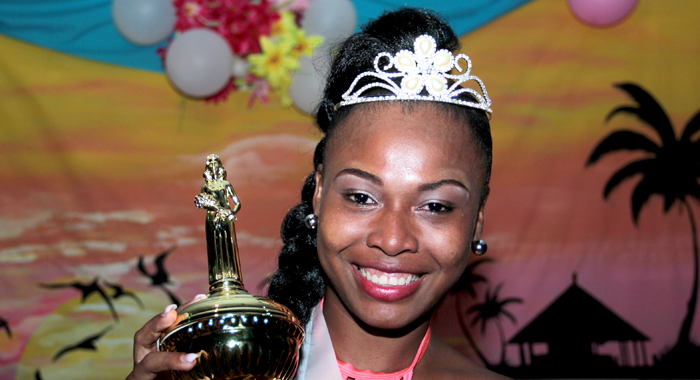 Osment defeated four other contenders in the pageant, which saw contestants answering their interview questions while wearing bikinis.

She also won all but one of the judged categories of the event, which included appearances in career and casual wear.

She won the Best Career Wear category with her maid costume.

Her remix of Singing Sandra’s “Die With My Dignity” calypso won Osment the judge’s nod in the talent category.

Osment’s version urged young girls to resist the trinkets that men may wave at them while trying to woo them.

In the interview category, which Osmet also won, she was asked:

“If there was one thing you could take with you to the grave, what would it be and why?”

First Runner-up was Ruth-Ann Bowens, Miss Seductive, who also won the LIME’s Viewers’ Choice award and the Miss Photogenic title, neither of which contributed to her final tally in the show.

Second Runner-up was Shafiker Hector, Miss Charismatic, who the judges concluded had the Best Bikini Wear.

The other contestants in the show were Indica Williams, Miss Prestige, and Mekeisha Johnson, Miss Foxy.