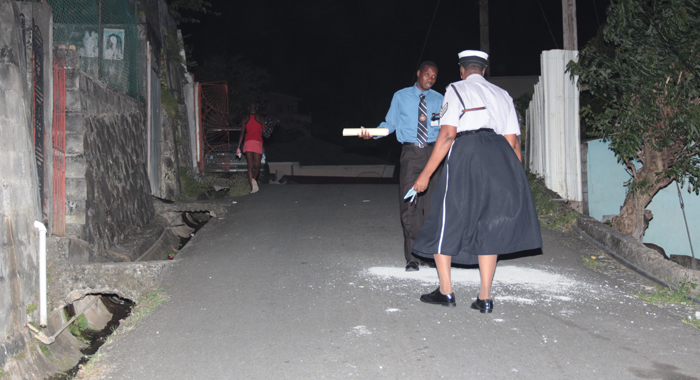 Police at the scene of the stabbing in Lowmanson June 18. (IWN photo)

The father of the 12-year-old Lowman Leeward student who has been charged with the murder of another student says the development is a wake up call to all parents.

“I feel very sad, very broken down as a parent to know that your 12-year-old could reach that distance,” he told an activist in an interview on Friday, a copy of which has been obtained by I-Witness News.

The 12-year-old girl, a Grade 6 student of Lowmans Leeward Anglican School, is charged with the June 19 murder of Moesha Primus, a Form 2 student of the Intermediate High School.

Police say Primus sustained a stab wound to the left side of her chest during an altercation near her home in Campden on June 18. She was taken to the Milton Cato Memorial Hospital where she was pronounced dead.

“More or less, if [my daughter] was properly supervised, I believe in my mind today that she would not have been in that position.

The father said he has visited his daughter several times at the Central Police Station in Kingstown, where she has been kept since the incident on June 18.

“I can see it in her eyes she is still in shock,” he said, adding that he is convinced that his daughter does not understand the consequences of what she is accused of.

“I am still convinced that she is still in denial…” he said, even as he empathised with the parents of the dead girl

“My heart actually goes out to the victim because a mother has lost a child. I myself feel as if I have lost my daughter also, because now that she is in the position that she is in, I don’t even know if she is going to be the same person that she used to be after.

“Even though she is still alive, a part of her has died. So, to the mother of the victim, sincerely, I grieve for you, too,” he said.

The father, however, appealed to be public to show some consideration.

“I need the public to also understand that my child is only 12 years old. According to my knowledge, this is history in our country. This is history in that nobody has ever [been accused of committing such a crime] in St. Vincent at that age. I think all parents should open your eyes, listen and look and see where the children is stepping out of line so that we can prevent this in the future,” he said.