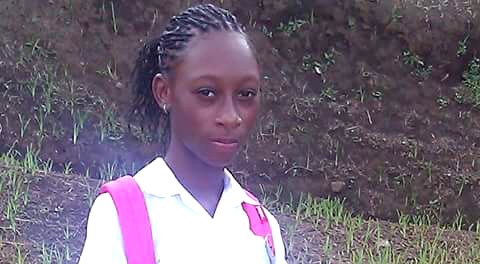 The stabbing occurred between 5 and 6 p.m. Thursday in Lowmans Leeward, just outside Primus’ home.

Primus was rushed to the Milton Cato Memorial Hospital (MCMH) after the stabbing.

It was not immediately clear whether she died in hospital or on the way there.

“I am devastated,” Bernadette Slater-Peters, principal of the Intermediate Secondary School, where Primus was a Form 2 student, told I-Witness News after leaving MCMH around 8:30 p.m. Thursday.

Outside the hospital, relatives and friends of Primus’ mother, Erla Spencer, attempted to console the grieving mother who lamented the fact that she had lost two of her children a few years apart.

Maxwell Scott, an elderly man who is one of Primus’ neighbours, told I-Witness News that he heard two persons engaged in an argument sometime after 5 p.m.

Scott said that the student who is accused of the stabbing, who other villagers say lives in Great House, another area in Lowmans, was in the street.

Primus was in the patio of the top floor of their two-storey home.

“They were exchanging words — dirty words — on both sides,” Scott told I-Witness News.

He, however, said he did not know what started the verbal exchange.

“And the one upstairs came down and stood up in front the one in the road. So it seems as if an assault went on there and there was a little scuffling between the two of them.

“Then I heard one say, ‘But you know the girl stab me!’

“Then they had their little talk. Another one came from upstairs and wrestled with the girl to take away the knife from the one how is accused of the stabbing.

“From that, I don’t know much of what happened.

“All I say the girl drifted and went down. When she got up back, she fell. A truck came up and they probably stopped the truck then they put her in and took her to the hospital,” he said.

The death comes a few days after a video surfaced on Facebook showing a fight among students in a community just outside Kingstown in which a male student is seen chasing a female student with what appears to be a piece of wood.

When asked how he feels about Thursday’s development, Scott, who has lived in Lowmans since 1981, told I-Witness News:

“I feel that these last few years what really happen is as if these children have no control whatsoever.

“Some of them walk with knives about the street. I would blame the parents for these kinds of situations, because sometimes people tell the parents what is going on and it as if none of them believe that they are wrong. Or they never make any kind of settlement. They don’t’ make settlement with children,” Scott said in a general commentary about the behaviour of some parents and children.

“That’s how it come to these ends,” he told I-Witness News.

“They seem to have this almost like gang-style. No one rebukes the other, and that is the toughest thing.

Villagers say that the stabbing may have been a spillover from an earlier disagreement between the two girls.

11 replies on “15-y-o student dies after being stabbed, allegedly by primary school girl”