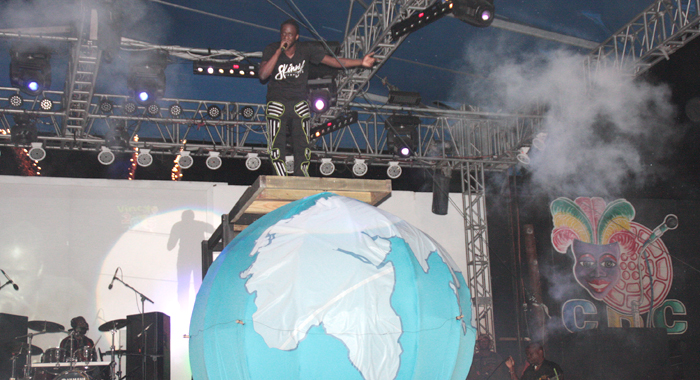 Skinnny Fabulous is on top of the world with his double soca win. (IWN photo)

Gamal “Skinny Fabulous” Doyle is well on his way to repeating Delroy “Fireman” Hooper historic feat of 2014: winning the Ragga Soca, Power Soca and Road March titles in one year.

The “This Island Is Mine” artiste on Saturday won both the Ragga and Power Soca crowns, forcing defending monarch Fireman, his longtime soca rival, into third place during the show at Victoria Park.

But while Skinny may have his eyes on equaling Fireman, he should look out for Shane “Hypa 4000” Husband.

Hypa 4000 made it clear to patrons during Saturday’s show that while he was not expecting to win any of the crowns up for grabs that night, he was confident that the Road March title will be his.

Fireman placed second in the Power Soca category of the competition.

Luta, who returned to the competition after several years’ absence, placed fourth.