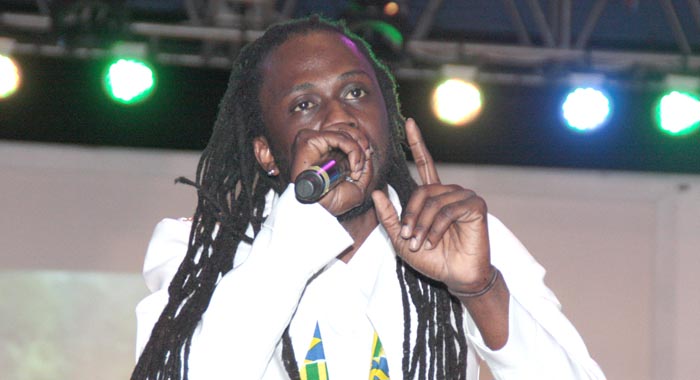 Costume bands will cross the stage at Carnival City Victoria Park today, Mardi Gras, to bring the curtains down on Vincy Mas 2015, after a weekend of the major shows, which many patrons said were not as exciting as previous years’.

But with the major shows all but over, one area of huge anticipation will be the Road March competition, as carnival lovers wait to see if

Gamal “Skinny Fabulous” Doyle will equal his soca nemesis, Delroy “Fireman” Hooper, and win all three soca titles in one year, as Fireman did last year.

The 135-pounder might find it hard for a claim of “bad minded” manoeuvres by other competitors for the Road March title to stick, as he did during the Soca Monarch Show on Saturday.

On Saturday, Skinny won both the Ragga and Power Soca crowns, in a show, where both he and Fireman used zip lines and pyrotechnics as part of their power soca presentations.

But while Skinny’s zip line might have added to his presentation, Fireman’s definitely took away.

Skinny, dressed in an illuminated suit, slid seamlessly from the double-decker stand to the stage, while Fireman appeared to be stuck at one point in the middle and had to be hauled onto the stage at the end by his teams.

“Yo’ bun bad mind, and all who believe in originality, put your two hands in the air right now,” Skinny said during his presentation.

Skinny, who has used a jet pack and a helicopter in past power soca competitions, told patrons that he does not copy anyone during his acts, but soca lovers recount that he has in fact used props after they were used in Trinidad.

But even in St. Vincent, the zip line idea is not a new one, only that Skinny and Fireman were able to obtain permission to use the contraption, two years after the Carnival Development Corporation turned down a similar request by Lornette “Fya Empress” Nedd-Reid.

Both Skinny and Fireman used pyrotechnics in their presentations, once again raising questions about the safety of patrons at the show.

During Fireman’s presentation, photographers and other media personnel that the CDC accommodates at the front of the stage, were not warned that pyrotechnics would be used, and at least two persons, (including this writer) were struck when some of the pyrotechnics went off at an angle rather than vertically.

During his presentation, he brought on stage supporting acts dressed in outfits from different parts of the world, including the Middle East, Asia, South American and Africa.

The international soca star ended his performance singing atop a spinning globe, which at times emitted sparklers.

Skinny also took the Ragga Soca title with the patriotic “This Island Is Mine”, a song celebrating St. Vincent.

His presentation included a pan side, dancers, and the Royal St. Vincent and the Grenadines Police Force Band.

The results, and Skinny’s victory over James “Jamesy P” Morgan and his “Chronic Disorder” set off on social media a moralistic and emotional discussion about whether a song that celebrates and promotes the smoking of marijuana, should have triumphed over a “patriotic” one.

Fireman, the 2014 Ragga Soca Monarch, had to settle for third position with “Drunk Again”, a similarly themed song as his winning rendition last year.

One night earlier, on Friday, Miss SVG 2015, De Yonté Mayers also did the double, winning the Miss Carival pageant, a show that many patrons described as “rather boring”.

The 19-year-old Victoria Village resident defeated eight other regional beauties to take the crown for the seventh time since the show started 30 years ago.

She also became the first Vincentian contestant to win the pageant since 2008.

Mayers won the all but the Interview segment of the judged categories of the show.

“I kind of had to prove the naysayers wrong. Some person were saying that I wouldn’t do anything in Miss Carival even though I won everything in Miss SVG,” Mayers, who made a clean sweep of the Miss SVG pageant in May, told I-Witness News after her crowning Saturday night.

She said she had no idea why persons were saying that she would not have won.

Asked if it was her intention to prove her critics wrong, Mayers told I-Witness News, “That, and to live up to the expectation of Vincentians and to my ambition.

“Because I would have beat myself up if I hadn’t done my best; if I hadn’t won,” she said.

Mayers said that when she first met the other contestants, she felt that Miss Trinidad and Tobago Afeya Jeffrey, would have been her major challenge.

“And then I heard Dominica speak,” she said of Odessa Elie, who won the interview segment and placed First Runner-up.

“I thought everybody was a challenge. I was actually scared of all of them because they’ve been in for so many shows, and Miss SVG is actually was my first. So I was daunted and I had to have a few ‘Cut it out, De Yonté’ talks.

“I was encouraged and told that I am as good as the other girls and it’s what happens tonight that matter,” Mayers told I-Witness News.

Semone Richardson of Blondie Bird & Friends  won the Queen of the Bands competition with “Mirage”, a portrayal from their presentation

David Sky Llewellyn of Ahdrenalin Mas Band   was crowned King of the Bands with “Eastern Interlude” from the presentation “An Eastern Travelogue”.

On Monday, thousands of persons turned out in Kingstown to participate in the afternoon t-shirt street party.