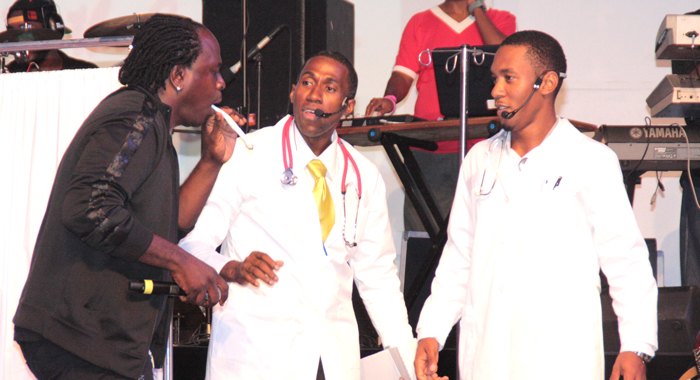 Jamesy P endorsed the smoking of marijuana during his performance of “Chronic Disorder” on Saturday. (Photo: Zavique Morris-Chance/IWN)

Vincentian soca artiste James “Jamesy P” Morgan has endorsed the smoking of marijuana, but urged persons to respect the laws of St. Vincent and the Grenadines, where cultivation, procession or sale of the plant is widely common, though illegal.

In the song, Jamesy P says, “As a consumer, I bun weed regular/ I love weed so much/ I have a weed disorder.”

In his performance Saturday night, he noted that the United States of America has changed its law to accommodate the use of marijuana for medical purposes.

But while Jamesy P, came out in support of the smoking of weed in St. Vincent and the Grenadines, said to be the second largest producer of marijuana in the Caribbean, he told persons to expect legal ramification for contemptuous disregard for the law.

“… I want to say one thing. Marijuana is not yet legalized in St. Vincent and the Grenadines. So who want to smoke weed, go ahead and smoke it in the privacy of your own home, where the police them can’t see yo’. Because, if the police them catch yo’ ah smoke weed, you know what going happen to yo’?” Jamesy P said, before singing, “Is handcuff in yo r*ss/Jail house in yo’ r*ss.”

Prime Minister of SVG Ralph Gonsalves has initiated a CARICOM-wide discussion on the decriminalisation of marijuana for medical purposes.

One reply on “Vincy soca artiste endorses the smoking of ‘weed’”