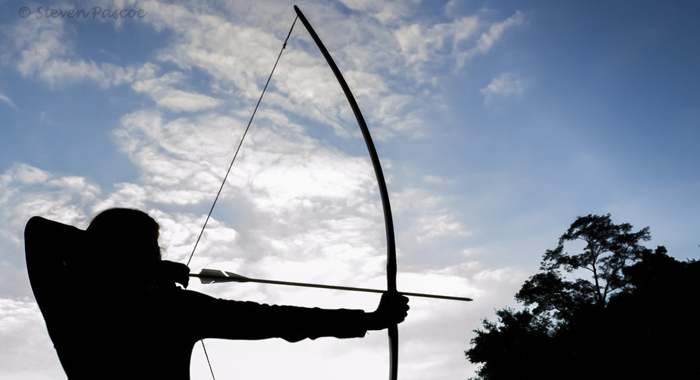 (We’ll announce soon opportunities to win when you read this short story. Tell your friends!)

Boysie was known as the village hunter; anything that you wanted, you could depend on him to catch. That was how he made his living.

Near six feet tall, robust looking and chocolate brown in complexion — the progeny of a black father and a mulatto mother — Boysie’s agility was legendary. It was on one of these hunts that he came across Seetha, a girl who he had had his eyes on for quite some time. Like many of the other guys in the area, he had heard that she was kind of wild, but he didn’t put any truth to it, since he knew that her parents were disciplined and staunch Hindus who, he was sure, would lead their daughter in the right direction.

On that evening, when the crickets were creaking and the bullfrogs were croaking like never before, Boysie had actually been on a mango tree, his bow raised — he had made it himself from bamboo — and ready to pierce a large manicou, when he heard a sweet voice some distance away. Seetha, with a washbasin on her head, was singing “Brown Skin Girl”, as she negotiated the track out of the ravine that led to the main road. Her dress — a bright yellow and red — was wet and clung to her copious body, revealing firm breasts and thighs that were curvaceous to perfection.

Forgetting about his prey, Boysie, a climber from birth, slid off the tree in a flash, as if it were his natural habitat and extended his large hand to Seetha. In it was a succulent looking Julie mango that was as big as a ball — on his face was a humongous grin — exposing perfect white teeth.

That had been two years ago, when she had just turned 15, she had put down her basin and they had sat under the mango tree and chatted for what had seemed like hours, though it was only twenty minutes. He had discovered that she was a very determined young woman, who even at that age had already made up her mind that at the earliest opportunity, she was going to leave that place, which in her words was “behind God’s back”, and go somewhere where people didn’t study her business — somewhere like America or Canada — she had said.

They continued to meet there, two or three times a week, after that first encounter. Sometimes, they went to the overlooking hill, where there was an expanse of flat grasslands at the very top — that was well secluded — and shaded by a cluster of mammy apple trees – and lay down, looking up at the blue skies — or if it was dark, the midnight stars –, while Seetha dreamed about being in a plane heading north. Boysie didn’t care much about going anywhere — already spent and smoking a big spliff –, which Seetha would sometimes take a drag of, he would lay there, just enjoying her presence and the lingering sensation of the coconut oil that made her hair shine and her skin smooth.

The boys wouldn’t believe him if he told them he was seeing her. Besides, Seetha had warned him that she wouldn’t see him again, if he ever dared to mention their names in the same sentence.

And, the two had actually grown into pretty close friends over the years; never mind that it was the best-kept secret in San Fernando.

Now, on this particular evening, when it seemed that the rain wouldn’t stop crashing down on them, Seetha was complaining that she was expected to marry Ramnarine. They had sought shelter under a tamarind tree, where Seetha continued whining, while Boysie — distracted by the huge crabs that were climbing out of their holes – considered the money that he was losing by having to listen to Seetha’s disgruntlement, about how her parents were inconsiderate.

Crab and Callaloo was a popular dish in the twin island republic, but Boysie knew he couldn’t go after them with Seetha at his side.

Boysie was familiar with Ramnarine. They had once played cricket for the same team. Ramnarine had been a valuable spin bowler, until he had decided that he needed to spend more time in the land.

“Yes, Boysie … you listening to me or you studying the stupid crabs … they planning on marrying me off in December. That’s only three months’ time.”

“I hear you Seetha, but you know that boy isn’t so bad, he does really work them land well. At least you won’t starve, with all those pigs and chicken that.”

“What? You think I studying chicken and pig? The boy can’t even read his name. I want to move up in life Boysie, not down.”

“Well, go away as you always planned. The world is a big place, but me, I happy right here”.

“You gone doltish, too. You think is so people does go away. You think I want to be a damn fugitive in another man’s land…”

Boysie interrupted: “Whatyou talking bout girl, so you don’t know that Ramnarine have his papers for Canada?”

Seetha looked at Boysie with incredulity, her mouth agape: “That piece of boy is a landed … you are sure … who tell you so?”

“Is so I hear people say, and I think it’s true because remember that year when he went away when he was ten, well his aunt did adopt him after her husband died and she needed company. She did take him to Canada but after his father get real sick, he came back and never returned.”

Seetha didn’t want to get too anxious. Sure, if what Boysie was saying were true, that would change things. It would really give her a better life, she thought. She would leave this sorry place and finally become somebody. She promised herself that she would find out that very night, when his family and her parents meet.

Boysie thought about Seetha and Ramnarine together. The girl was a real firecracker. Boysie wondered how Ramnarine was going to cope with her.

He knew he won’t be able to see her as much as before — she had told him so — but she had insisted, that the time would come, when she would need her nature boy — that’s what she called him. He smiled. He had had some good times with Seetha.

(Next episode on Sunday…)