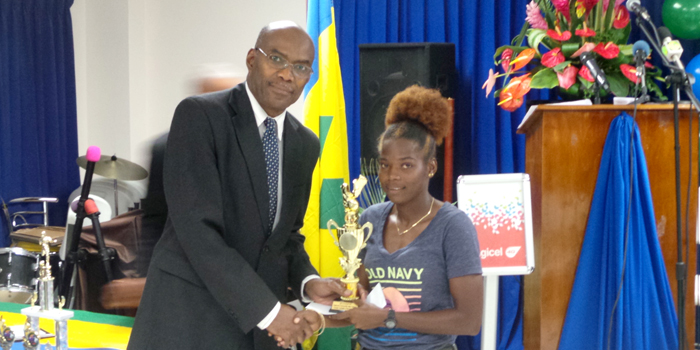 The accolades were bestowed on the players on a night when the SVGFF recognised and rewarded the top performers across its many competitions.

Slater, an unassuming but lethal marksman from South Leeward, displayed an insatiable appetite for goals that saw him being a unanimous and popular choice on the night, based on the response from those in attendance. He, however, was unable to attend the function to collect his reward owing to what his team management said was a bout of illness.

A fisherman by profession, Slater’s sharkish and predatory instinct saw him being the top goalscorer and Most Valuable Player (MVP) in the Hairoun Premier Division in leading his team Camdonia FC to second place behind Hope International.

In the Hairoun/Digicel Community Inter-League, Slater dismissed the maxim that “every day is fishing day but not every day is catching day” by gabbing the MVP award as he led his team, South Leeward to the title.

Slater’s exploits were not just confined to the local level as he also displayed his penchant for goalscoring on the international scene by scoring a hat trick against Trinidad and Tobago in the CFU U23 Olympic Qualifiers in pushing SVG to the next round of the competition. He also has 3 goals over two legs in 2018 World Cup Qualifiers against Guyana.

Browne, the petite System 3 striker, was the top goal scorer in the Women’s Division in the Club Championship and repeated the feat for East Kingstown in the Community Inter-League Women’s division.

She was also one of the standout players in the SVG team, which won the inaugural Windward Islands senior Women’s tournament.

Rouse a defender with Parkside FC and South Leeward, caught the eye when he was adjudged the best defender in the U17 Division in the National Club Championship, and also excelled in the Inter-League.

The awards ceremony held under the theme “Rewarding Excellence” saw many of the top performers at the local and national levels being recognised with trophies and cash prices for their accomplishments.

It was addressed by president Venold Coombs who spoke about his tenure and accomplishments as he outlined the many courses in Grassroots, D License, Referees as well as the many competitions for the various age groups. The president also highlighted the development of the women’s game, which led to the success of the team in winning the inaugural Windward Islands Senior Women’s competition at the Victoria Park.