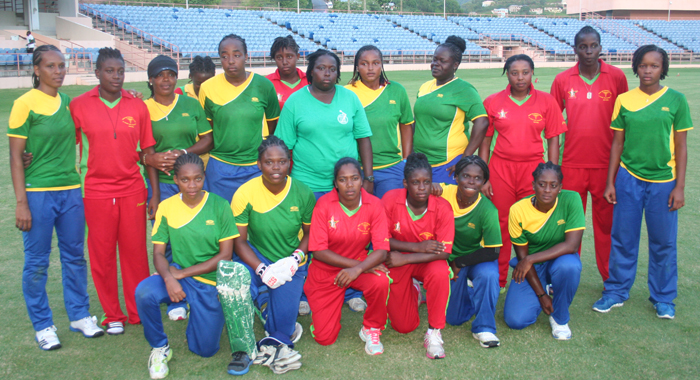 Coach of the senior women’s cricket team and recently appointed Southern Windwards coach, Cleton Burnett, is a man beaming with pride and satisfaction after his team thrashed their Grenadian counterparts 3-0 last weekend in the Spice Isle.

The Vincentians had travelled to Grenada to take on the host in the three-match series which served as trial matches to select the Southern Windwards team for the West Indies Women’s tournament.

Prior to leaving these shores Burnett had expressed confidence that his team were going to win the series and that he was looking for possibly 10 picks in 14-member squad.

The Vincentians duly swept the series and earned eight selections and three of the four reserves with Julianna Nero appointed captain in addition to Burnett being the man in charge.

“We played good cricket and we were always the better team, a happy Burnett said upon returning home.

He said that the bowlers did well with offspinner Jack and LaToya Providence showing good control and getting among the wickets.

He said that the batters did well with the experience Nero and Jack posting good scores with good support from Stacy Ann Adams.

The coach said that with the exception of the first match, in which the batters struggled a bit, the team never looked seriously threatened.

In the opening match SVG won by 3 wickets.

Grenada, who batted first, were dismissed for 115 in 31 overs with left handed middle-order batter, Akeria Peters getting 32, Afy Fletcher 24 and Marilyn Ettiene 21 with Vanisha King taking 2/12. SVG found the going tough and took all of 36 overs to reach their target — ending on 116/7 in 36 overs.

Captain Nero hit a topscore of 35 and Shavorne Clarke 18 to lead the batting.

In the second match, SVG won by 5 wickets.

The third and final match was a relative high-scoring affair with SVG posting 197/8 in their 50 overs with Nero getting 58 and Shavorne Clarke 48. Carena Noel 3-32 and Shantan Charles 3-28 were the best of the bowlers.

Burnett, in looking at the Southern Windwards team, said it was a good composition with good all-rounders with the spin department serving up experience and talent.

While expressing confidence in the team doing well, the coach was concerned that there would be no camp prior to the tournament.

“The players from Grenada are over there and we are here so we just have to hope that they are doing some work in the meantime because team preparation is so important,” he said.