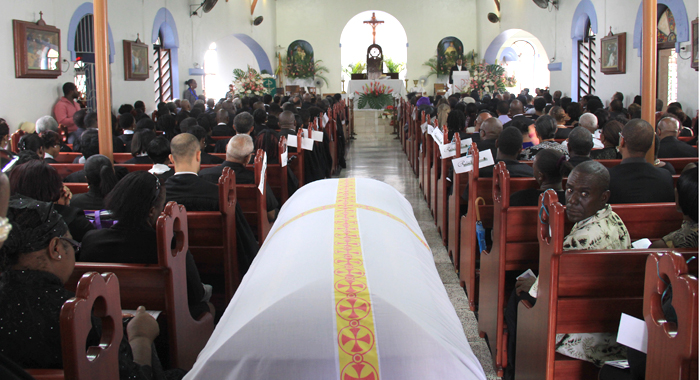 Nicole Sylvester’s casket at her funeral on Monday. (IWN photo)

Glowing tributes were delivered on Wednesday at the funeral of prominent Vincentian lawyer and President of the Human Rights Association Nicole Sylvester, who died on July 2 at age 51.

Her death came two months after she suffered a stroke.

Sylvester’s passing, nevertheless, surprised many as she was making progress and had hoped to return to work in September.

President of the Organisation of Eastern Caribbean States (OECS) Bar Association, Ruggels Ferguson, in a tribute delivered at the Cathedral of the Assumption in Kingstown, where the funeral service was held, said Sylvester “has made her contribution to humanity.

“And rest assured, despite the fact that she is gone at the youthful age of 51, 24 years of those years, which she has devoted fulltime to the bar, she has made her life mark,” he told mourners, which included members of the local and regional bar, and radio audiences.

“The region, not just St. Vincent, but the entire region, the OECS and the entire Caribbean region has lost a brilliant advocate, an outstanding advocate, a livewire, literally, and well-rounded attorney whose practice spanned several areas of the law, including criminal law, civil law, constitutional law and corporate law,” Ferguson said of the former president of the OECS Bar Association and pioneers of its law fair.

Sylvester’s friend and personal attorney, Kay Bacchus-Browne said that apart from their personal friendship, she and Sylvester shared “a deep love for our country and for defending democracy and seeking the rights of Vincentians, more often than not, pro bono”.

Bacchus-Browne, herself a prominent lawyer, noted that she and Sylvester presented “the people and Hon. Arnhim Eustace” in a lawsuit against the constituencies Boundaries Commission in 2010, in which they succeeded in countering “what we believed was an attempt to gerrymander by increasing our constituencies from 15 to 17”.

Both lawyers worked on several constitutional motion regarding free and fair elections and demonstrated in Kingstown when Parliament removed the application of the Police and Criminal Evidence Act (PACE) in the nation’s courts.

Bacchus-Browne said that their advocacy in this regard led to death threats against them and lawyer Vynnette Frederick.

“Working with Nicole was a challenge,” Bacchus-Browne told mourners.

“I recall I hardly slept during periods of the matters we did together. I would work until midnight. Nicole will sleep and awake about 1 a.m. or 2 a.m. and be ready to work for hours,” she said.

And, former attorney general, Parnel Campbell, Q.C., in a tribute on behalf of the legal fraternity in St. Vincent and the Grenadines and the OECS, said, “Few lawyers practising in St. Vincent and the Grenadines have been so admired and so respected and held in such high esteem by so many colleagues for so many reasons than Miss Nicole Sylvester”.

“Nicole was a brilliant Lawyer. Period. She practised her profession in accordance with the most noble traditions of the bar. Colleagues, magistrates, masters, and judges could accept her word without hesitation. If at times she came across as aggressive, that was only because she was exceedingly passionate in the advocacy of the causes she was promoting or defending. She was always fearless, but never abrasive; always insistent, but never obnoxious; occasionally scathing, but never insulting; she would fume at a perceived injustice, but she would never lose her temper,” Campbell said.

He said her colleagues “respected her to a man — and to a woman.

“In time, she would have become St. Vincent’s first female Queen’s Counsel — of that I do not have the slightest doubt,” Campbell said.

Campbell noted that the accolades were not to say that Sylvester was perfect.

“None of us is. But she has come much closer to that deal than any lawyer I know, or have known. Nicole was known nationally as on outspoken advocate and critic on public human rights issues, women’s issues, governance issues and all matters pertaining to public opinion.

“Criticism did not deter Nicole, she called it as she saw it, and very often wherever she perceived injustice she demonstrated the courage of her convictions by organising or joining in demonstrations and other means of peaceful and democratic protest.

“She truly railed against what she perceived as sin, but always found it in her heart to love the perceive sinner.

“Nicole Sylvester — a true woman of class,” he said, adding, “May the good Lord shine his perpetual light upon her. The legal profession expresses its collective condolences to her children, relatives and friends. We mourn her loss; we shall miss her dearly. May She Rest In Peace!”

Sylvester is survived by two sons, Nicholas and Justin Sylvester.

She was buried in Chauncey.