Courtney Williams crashes out of Pan Am games 200 metres 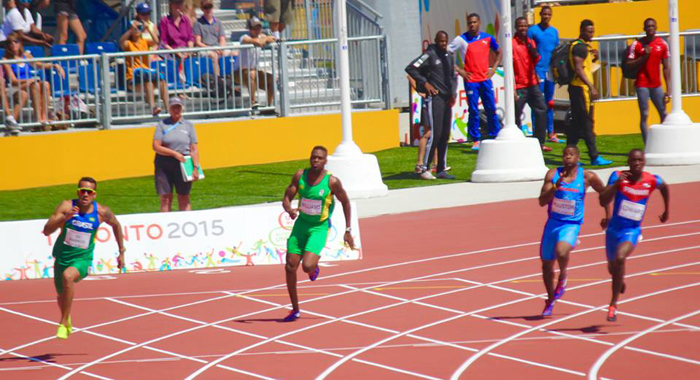 Williams fell short of making the semi-finals in the event at the Pan Am Games.

Running in Heat Two at the Pan American Games in Canada, Williams, 24, crossed the finish line in 21.35 seconds to finish last in the group of six runners.

The Heat was won by Panama’s Alonzo Edwards in a time of 20.39 seconds, with Bruno Debarros of Brazil second in 20.41 seconds and Trinidad’s Kyle Greaux third in 20.75 seconds.

Coombs set the then record of 20.76 seconds on May 19, 1995 at the NJCAA Championships in Odessa, United States.

But Williams, in what some described as “running out of his skin” at the All Lights All Comers Meet on June 5 in Texas, produced what was for him a stunning time of 20.59 to obliterate Coombs’ mark. The performance took centre stage two weeks ago when some noted coaches, athletes and former administrators expressed reservation about the time.

They noted that the athlete had never run that fast prior or after setting the record.

Ollivierre was so confident that his cause for concern was genuine that he suggested that he would take a break from coaching if Williams replicated his record-breaking time at the Pan Am Games.

One local media outlet later said in a report that the International Association of Athletics Federation has ratified Vincentian Courtney Williams’ time of 20.59 seconds.

The time, the media entity pointed out, placed the athlete at 109th in the world rankings, as of July 14.

Ollivierre, in response, said that the IAAF had also ratified the times of disgraced sprinters Marion Jones and Justin Gatlin before they were subsequently banned for using illegal substance.

While being quick to dismiss any suggestion that he was accusing Williams of using any such method to gain success, Ollivierre said the ratification by the IAAF is the least of the story.

Speaking hours after Williams failed to advance and eclipse his benchmark, Ollivierre said that it was no surprise that the athlete did not better the time since his performance over time never gave the impression that there was a consistent upward movement.

Ollivierre is of the view that at 24 Williams has gone past the stage where he can improve significantly to reap any kind of success at the international level.

“Frankly, I think TASVG (Team Athletics St. Vincent and the Grenadines) should give the Olympic Solidarity Scholarship to someone else and Courtney should seriously consider retiring.

“Some people may think I am being harsh but I am in this business for almost four decade and is best placed to assess an athlete and I cannot see him doing more than what he is doing now,” he said.

International technical official Woodrow Williams, speaking prior to Thursday’s Heats said that for William to run under 21 seconds he would have to be doing 10.20 in the 100 metres but he was only doing 10.8 and “that wasn’t good enough”.