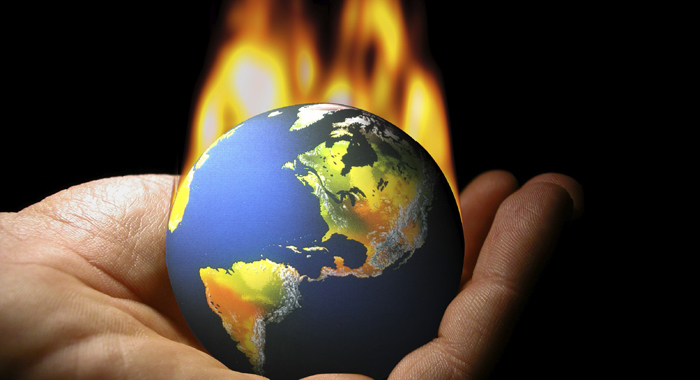 CASTRIES, St. Lucia — Caribbean negotiators at the world climate talks in Paris will gather here this week to discuss with journalists, artistes and civil society, strategies for effectively communicating to the developed world the devastating impact of climate change on the Caribbean.

St. Lucia’s Minister of Public Service, Sustainable Development, Energy, Science and Technology, Sen. James Fletcher, who is also a negotiator at the 2015 Paris Climate Conference, will host the two-day event, dubbed “Caribbean Voices on and for Climate Justice”, which begins on Thursday.

“What we have attempted to do is provide potent voices that can speak to the issue not just at the regional level but at the international level,” Permanent Secretary in the Ministry of Sustainable Development, Sylvester Clauzel, told reporters on Wednesday.

“It was concluded that perhaps our journalists, our artists may be best suited to provide that moral voice, to make that statement, to use their creativity to communicate to the rest of the world, what our islands and our poor people and our vulnerable communities are actually experiencing or will experience if something is not done to redress this critical situation,” Clauzel said.

The event hopes to introduce journalists and artists to the Caribbean’s preparation for the 21st Session of the Conference of the Parties to the United Nations Framework Convention on Climate Change (COP21/CMP11), otherwise known as “Paris 2015”.

At COP21, which runs from Nov. 30 to Dec. 11, small island developing states (SIDS) like those in the Caribbean are hoping that the world will sign a legally-binding climate accord.

SIDS say that COP21 must agree to keep global temperature rise to a maximum of 2 degree Celsius above pre-industrialisation levels to avoid catastrophic climate-related events, many of which are already affecting the Caribbean.

Clauzel said that the Caribbean is already experiencing the greatest brunt of climate change, although it has contributed negligibly to climate change, adding that the regions is “one disaster away from economic collapse”.

He said the Caribbean has a moral   voice and has important talent that can highlight the impact of climate change on the region.

“And so we have brought together prominent and well-known artistes and journalists from around the region … to begin to create a voice and a movement in the region that will catalyse thinking and will create change both in the minds of our politicians, our civil society people and our general public about what really this is about and how we can influence the international community to take serious action and not treat us as second-class citizens in this world for which we are experiencing the greatest brunt of climate change and not having contributed significantly to its occurrence,” Clauzel said.

Regional artistes David Rudder and Alison Hinds, along with Kendel Hippolyte, an award-winning St. Lucian poet and playwright, have agreed to join the movement.

Hippolyte told the press conference that addressing climate change could be easier if persons change their attitude to their environment.

“And if we deal with our mother as a person is suppose do deal with his or her mother, then so much falls into place,” Hippolyte said.

The event is also being organised in collaboration with the Friedrich Ebert Stiftung, Panos Caribbean and the Organisation of Eastern Caribbean States Commission.

Indi Mclymont-Lafayette, country coordinator, Jamaica of Panos Caribbean, who told reporters that she is excited about the initiative, said a similar workshop in Castries in 2008 inspired Panos Jamaica’s Voices for Climate Change Education Project, which was named a United Nations best communication practise for the region.

She noted that about 30 persons will participate in this week’s event. “And that’s a lot of people power based on whom we have.

“And so I think we will be able to come out with some very concrete messages that we need people to get and understand about climate change as well as a stray for how are we going to take this thing internationally to ensure that we are effective,” Mclymont-Lafayette said.