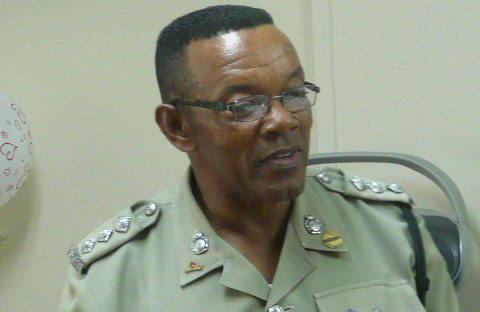 He is the epitome of who a law enforcement officer should really be.

Veteran police officer, Jonathan Nicholls, who earned a reputation over the years as one of the most versatile and reliable members of the Royal St. Vincent and the Grenadines Police Force, has retired after 33 years and four months.

Nicholls ended his career as an assistant superintendent of police (ASP) in charge of the Royal St. Vincent and the Grenadines Police Force Public Relations and Complaints Department. He had earlier proceeded on pre-retirement leave, from April 1 to July 25, 2015.

About his retirement plan, Nicholls said: “I am just relaxing. I have neglected my personal development to an extent over the years, but I will work on that. I intend to be more involved in my church and will like to pursue a degree in theology. God has blessed me with a number of skills and talent and I will like to continue to work with the youth.”

He added: “If the Lord continues to bless me with health and strength I want to continue to serve the country in whatever area I can.”

Nicholls was enlisted as a member of the local constabulary on Dec. 1, 1981, and went off to the Old Montrose Police Training School a few weeks later where he received his initial training in law enforcement. He graduated in May 1982 copping the Best Recruit Award and the Baton of Honour as well as two other awards of the seven that were up for grabs.

His journey as a police officer started as a beat officer, where he spent 10 months at Central Police Station.

“It was a good place to work. You were able to get a recommendation if you worked hard there,” said Nicholls. His dedication to his work saw him being transferred to the Traffic Department where he made a name for himself.

“I dealt with people in a professional manner. Even people who I took to court we are still friends today,” Nicholls said. After two and a half years at the Traffic Department, Nicholls was transferred to Union Island. “After ten months, I was recalled to the Traffic Department. It was said that the standard on the road had fallen and I was one of the persons reassigned to Traffic.” He was later sent to a Caribbean Traffic Management Course in Barbados where he topped the course and received the top student award after receiving a 100 per cent final grade in his exams. “That served as the launching pad for my career.”

Nicholls’ first promotion came on April 1, 1988, when, as the most junior constable at the Traffic Department he was promoted to the rank of corporal.

The police promotional exam was reintroduced and Nicholls had placed second overall. In September 1989, Nicholls was transferred to the Police Training School as an instructor where he applied himself and received several regional training courses, developing himself as one of the most resourceful instructors in the region. On Jan. 1, 1991, he was promoted to the rank of sergeant and later station sergeant on May 1, 1998.

On Jan. 4, 1999, the Police Public Relations and Complaints Department was established to build closer ties between the local constabulary and the public. Against this backdrop, Nicholls was chosen to be second in command at the department to former superintendent of police, Artis Davis, who was assistant superintendent of police then. “From the foundation of the office, we launched several initiatives to improve the relationship with the public and the media, which was at an all-time low. We reaped success in the upcoming years with cultural educational programmes alongside NGOs and various community groups,” said Nicholls, who was promoted to the rank of inspector on July 1, 2002, and acting assistant superintendent of police on Nov. 1, 2010, which was later confirmed on May 1, 2011.

Among the highlights of his career, Nicholls said he was instrumental in introducing a quarterly thanksgiving service, a calypso competition, a karaoke, and a carolling contest in the constabulary. He also engaged in the restructuring of the Police Youth Clubs, and assisting with organising proper security for interschool sports, which was plagued by incidents. He was also the first host of the Police On the Beat programme, an interactive radio programme that was suggested by Chester Connell, then co-owner of First FM. The programme was first aired on First FM and was later jointly broadcasted by that station along with the National Broadcasting Corporation until the closure of First FM. The programme continues on NBC.

Nicholls said he was happy to be a part of the team that oversaw the growth of the Pan Against Crime programme. He also had the opportunity to represent the Police Force on the Carnival Development Corporation Board as well as locally, regionally and internationally on the issues of domestic violence, and gender-based violence. He has also contributed his time to the Special Olympics programme in St. Vincent and the Grenadines, the School for Children with Special Needs and the Society of Persons with Disabilities.

Giving a word of advice to young police officers, Nicholls said: “Wear the uniform with pride. You have to be tactful, resourceful, and you have to know how to improvise as well as be flexible and discretional. You have to be able to assess a situation and act using a humanitarian approach. Even at times when you will be firm in executing your duties, it will not hurt in maintaining a friendly attitude.”

Nicholls further stated: “Always be willing to listen and identify with every class of society. Try to be as unbiased as possible whether it is religion, politics, culture of otherwise.”

Nicholls said, “One should always serve with humility and always remember the uniform doesn’t make you better than anyone. It gives you certain authority, but pray for godly wisdom to use the authority wisely.”

Commissioner of Police, Michael Charles, as well as the rank and file of the Royal St. Vincent and the Grenadines Police Force wish Nicholls all the best in his future endeavours.