Visiting Garifuna: PM Gonsalves ‘decided that he doesn’t want to communicate with us’ 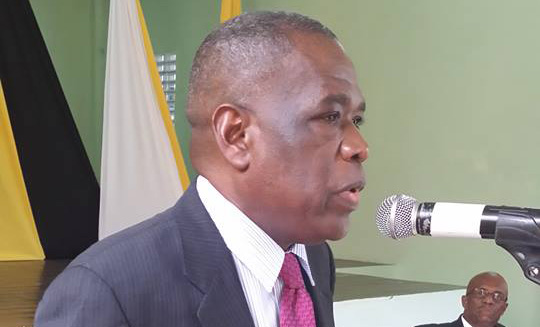 A U.S.-based Garifuna professor visiting St. Vincent and the Grenadines (SVG) to discuss honorary citizenship with the opposition says his group does not support any political party in the country, but has accused Prime Minister Ralph Gonsalves of not wanting to hold talks with them.

Prof. Wellington Ramos, a Belize-born Garifuna who lives in the United States, however, told a New Democratic Party (NDP) press conference on Wednesday that Prime Minister Ralph Gonsalves is yet to respond to their knock on the door.

Ramos is in SVG for a week of activities planned for the visit of a delegation of exiled Garifuna to SVG, which they consider their ancestral home.

The visit comes as the NDP pushes ahead with its plans to make all Garifuna honorary citizens of SVG if the party wins the next general elections.

Eustace announced the policy in May and it has been criticised by Gonsalves.

The Prime Minister attempted to equate the policy to the economic citizenship programme under the former NDP administration and further suggested that Garifunas will come to SVG to take away Vincentians’ property.

Garifunas are descendants of indigenous Vincentians, many of whom were exiled from the country in the 1790s.

The United Nations have declared Garifunas a nation in exile and Ramos said that since that declaration he has been working on a constitution for the Garifuna people.

He said the document is currently under scrutiny by the different Garifuna organisations.

“We are planning to have a Garifuna summit in Honduras next year, where that document is going to be ratified,” he said, adding that a Garifuna organisation in St. Vincent is “the missing link”.

Speaking at the press conference, Eustace reiterated his party’s commitment to making all Garifunas honorary citizens of SVG.

He said there are many challenges to be overcome, including some related to international law, but added that his party is committed to solving all the problems related to the honorary citizenship proposal.

“We want that to be a negotiated matter, not an announcing something that we are going to offer, but to sit down with the Garifuna, as promised from the beginning, and we will discuss those ways which we think are best…” Eustace said.

He said the discussions will include matters of international law and getting to a relationship that is meaningful and reflects what should be the feelings of SVG and Garifunas to each other.

The visiting delegation is expected to include exiled Garifuna Joseph Guerrero, who is slated to arrive in St. Vincent on Thursday.

During the visit, the delegation will participate in a number of events, including Garifuna rallies in Greiggs and Sandy Bay on Thursday and Sunday.

They will also visit Balliceaux, the tiny Grenadine island where the Garifunas were taken and where about half died before they were exiled to Roatán in Central America in the 1790s.

5 replies on “Visiting Garifuna: PM Gonsalves ‘decided that he doesn’t want to communicate with us’”