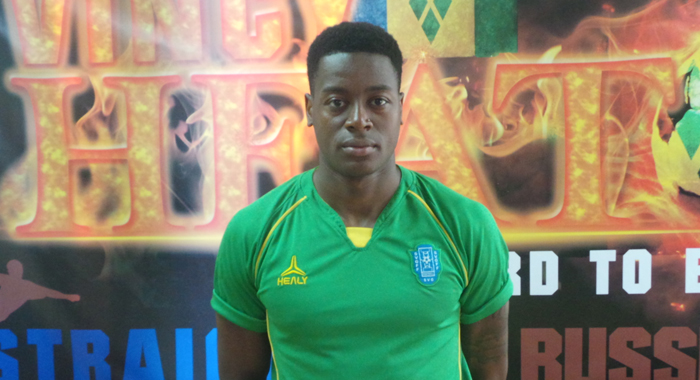 The St. Vincent and the Football Federation (SVGFF) has resumed it preparation and promotion for the next round of the Russia 2018 World Cup Qualifiers.

“Vincy Heat”, the senior national football team, has been drawn against Aruba in the next round of the Qualifiers to be played on Sept. 4 at the Arnos Vale Playing Field with the return leg set for the following Sept. 8.

The SVGFF was forced to scale down its promotions while awaiting both the draw and the outcome of a protest by the Guyana Football Federation (GFF).

The GFF had requested FIFA to investigate and rule on the status of the player Gavin James of SVG and the status and outcome of the game played in the preliminary competition for the 2018 FIFA World Cup Russia on June 14 between both teams at the Guyana National Stadium.

The GFF was questioning the eligibility of James and whether he was in possession of a SVG passport during the qualification games.

James, whose parents and grandparents were all born in SVG, did not possess a Vincentian passport at the time but carried a stamp by Immigration officials saying he is a citizen of SVG.

However, in a letter to the GFF, FIFA’s Disciplinary Committee ruled that “after careful examination of all the requested information and documentation, it was considered that no further intervention was necessary in such context”.

The Guyana Jaguars were forced to omit four of their overseas-based players for the first leg at Arnos Vale after they were unable to secure their Guyana passports in time for the match.

The GFF said that it is currently seeking legal advice on whether to appeal the ruling to the FIFA Appeals Committee.

SVG advanced on away goals after a 2-2 draw in Arnos Vale followed by a 4-4 tie in Georgetown.

The SVGFF, whose president Venold Coombs was elated with the outcome, will now focus on the match against Aruba, which are seen as “underdogs”.

But head coach Cornelius Huggins said that while on paper SVG appear to be the team with the better records, it was still a match to be decided on the field.

“They have the same eleven men and we could have a bad day, so we cannot just take them for granted,” Huggins said.

Coombs said that the SVGFF is currently scouting to find other quality overseas-based players who are good enough to represent SVG.

“We have people out there now looking for others like Gavin James to come and try out with the team. We are not just taking anybody’s word about these players; we must have concrete proof of first their eligibility and then their ability and they must make the effort to come home so that the technical team can get a look at,” the president said.

Should SVG get past Aruba, they will then be placed in a Group with Trinidad and Tobago, the United States and Antigua/Guatemala.

And Coombs said that the SVGFF’s World Cup Support Committee will be looking to put everything in place to promote SVG especially in the SVG-United States match.

“Our Committee, under the hardworking and competent Nelson Hillocks, will be working with every organisation and agency to make this a memorable event.

“We must give of our best on the field and off it so that the world out there will get a good look at St. Vincent and the Grenadines. And we have already received positive feedback from the government on this,” he said.

One reply on “SVGFF moving ahead after positive FIFA ruling”