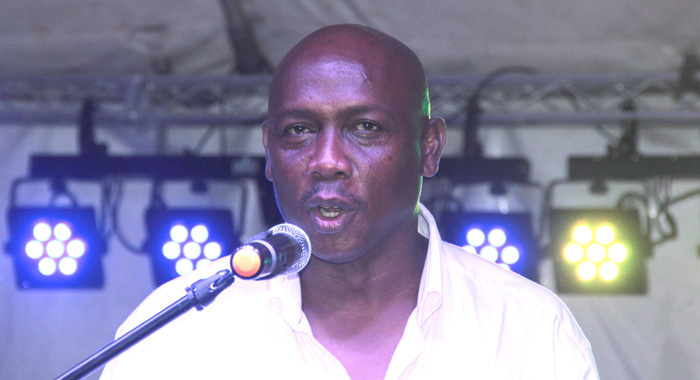 The opposition New Democratic Party’s (NDP) candidate for North Windward Lauron “Sharer” Baptiste has told persons who recently received offer letters from the government for lands in Sandy Bay not to pay for them.

Baptiste said his party will offer the recipient a better deal if it wins the next general elections, expected this year, ahead of the March 2016 constitutional deadline.

Baptiste, however, did not say what offer his party would make.

Offer letters for 48 lots of land in Sandy Bay were handed over on July 17.

I-Witness News was unsuccessful in its repeated attempts last week to verify with the Ministry of Housing the price per square foot for the lands in Sandy Bay.

Speaking at the NDP’s rally in Sandy Bay on Aug. 2, Baptiste said the Ralph Gonsalves administration “took away 80 acres of land” in Orange Hill “through a disguise organise by the name of National Properties.

“And they said that the reason why they take the lands is to build a hotel and some villas and a golf course.

“Today, the very same place, as you pass, the fellows turn around and they took away lands from people who were planting plantains and other crops and they planting the same thing that the people [were] planting. And what you think they do? Hire back the same people whose land they take to work on the same land,” Baptiste said.

“All whose land they take away in that 80 acres of land, book it and sure and believe it that yo’ getting get back yo’ land,” Baptiste said after telling the rally that NDP leader Arnhim Eustace authorised the announcement.

“And all them letters that Ralph Gonsalves give out three weeks ago that he want[s] money for land, don’t pay a cent until the New Democratic Party gets into office. We will revise and give yo’ a better deal on them lands,” Baptiste said.

He described the NDP as “a land party,” saying that the party subdivided the nation’s estates and distributed the lands to the people “because it was a philosophy of the New Democratic Party that every Vincentian must own a piece of St. Vincent and the Grenadines.

“But today the reverse is the Unity labour Party, them fellows selling out most of our lands, especially in the Grenadines, to foreigners,” Baptiste said.

“That is what the New Democratic Party did,” he said at the rally that formed part of a one-week visit of Garifuna leaders from the United States.

“We used to be like slaves on the Orange Hill Estate, but slavery done. And the New Democratic Party emancipate[d] the people on this side…” he said, adding that the agriculture sector was performing well under the NDP.

“But what happen now after 2001, when this unrelenting … enterprise masquerading as government with the solemn promise of all must eat but they have shamelessly practised a few shall eat all. We have now moved in … backward, in reverse, we have moved from prosperity into poverty.”

He said the government even want to determine the size and colour of citizens’ houses, an apparent reference to the ULP’s housing programme.

“And we are saying from the New Democratic Party we will change that,” Baptiste said, adding that the NDP didn’t have to build houses because people use to make money and build their own house to suit their desires.

He said that in many agricultural communities farmers can no longer afford to buy or maintain their vehicles or have lost them all together.

Baptiste further said that a financial institution has over 179 properties for sale, a suggestion that the economy is in a bad shape.

“Tell me, is this the kind of St. Vincent that we want? And Abuti (Garifuna for “chief”) is saying to you tonight that we are going to change things in this country,” he said.

Baptiste said that after the government distributes the next shipment of building material he will organise a rally to say thanks the government and indicate that they will still be voted out of office.

He said the number of young people at the rally shows that the future is bright for the NDP and St. Vincent and the Grenadines.

“I want to caution you young people here tonight not to become victims of the Unity Labour Party administration by settling and selling yourself to the supposed lies and lack of progressiveness and support.”