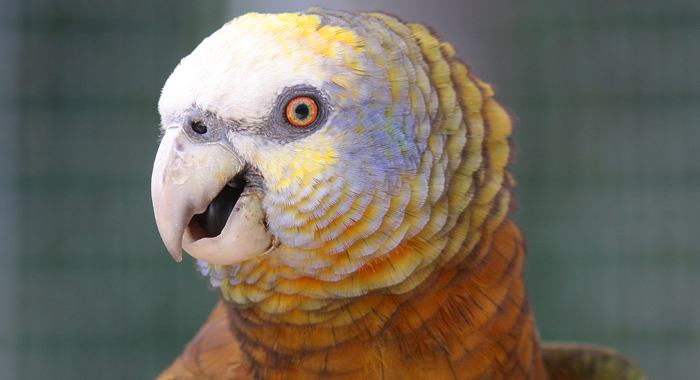 The 15 St. Vincent parrots sent to Germany as part of a breeding programme are yet to reproduce almost four years after arriving in the European nation.

The parrots were moved overseas as past of a breeding loan agreement with the Association for the Conservation of Threatened Parrots (ACTP), Minister of Agriculture Saboto Caesar told Parliament last week in response to a question from opposition lawmaker Roland “Patel” Matthews.

The parrot, whose scientific name is Amazona guildingii, is endemic to St. Vincent and the Grenadines (SVG), and is the nation’s National Bird.

Caesar said that after a period, the Government can determine that the parrots that were sent have not reproduced and demand them back.

Matthews, who is also MP for North Leeward, told Parliament that the conservation project that involves the shipment of parrots overseas has been in operation for a number of years.

He asked Caesar to say how many parrots have left the state and how many have since returned under this project.

Matthews also wanted to know if SVG has benefitted from any financial resources under this project, and, if yes, the extent of this financial benefit.

He also asked the minister to give an update of the programme to date.

Caesar said there were 15 parrots at the Nicholls Wildlife Conservatory at the Botanical Gardens in Kingstown that were closely related — some as close as siblings — while others had failed to pair.

He told lawmakers that to improve on the number of pairing while protecting the existing genetic stock, the Forestry Department decided that the breeding of other parrots within this group would not be allowed.

Birds at the ACTP were examined and the findings were similar, in that most of the birds were offspring from the parent birds that were legally exported in the 1960s and most of them were suited for cross pairing from the Nichols Wildlife Complex at the gardens, Caesar said.

On Dec. 16, 2011, the ACTP received 15 parrots that were transported to Berlin Germany.

The second phases will be a reciprocal transfer from the ACTP to SVG, Caesar said, but noted that while there have been successful pairings of the birds, they have not yet reproduced.

The Minister told Parliament that as part of the agreement, 120,000 euros were given to the Government, in addition to other direct support to the parrot conservation initiatives of the Forestry Department.

The 120,000 euros were given to support on-site conservation work on the wild parrot population, rehabilitating forest in the upper watersheds damaged by hurricane Tomas in 2010 and the 2011 floods, and construction of a modern captive breeding facility.

He said training for one officer at the postgraduate level in conservation in the United Kingdom was completed in 2009 at a cost of 20,000 pounds.

The training of three officers at the associate degree level in general forest management conservation was completed in 2014 at a cost of EC$90,000.

Veterinary checks on all birds in the local breeding programme at the Botanical Gardens were done in 2011 and 2013, and these were done to international avian standards, Caesar said.

He further said his ministry has received other technical support for the monitoring and evaluation of the captive breeding programme in Germany.

These visits included several officers from the Ministry of Agriculture and the United Nation’s Food and Agriculture Organization.