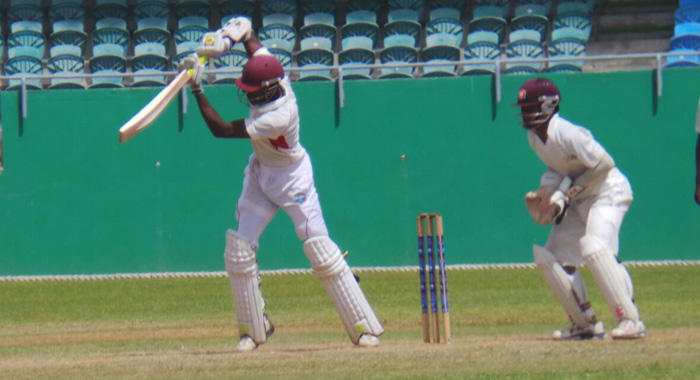 Keron Cottoy on the drive during his unbeaten 150 for SVG versus Grenada. (Photo: E. Glenford Prescott)

Allrounder Keron Cottoy etched his name into the annals of St. Vincent and the Grenadines cricket with a brilliant century to pull his team out of trouble against Grenada in their drawn match in the opening round of the 2015 senior Windward Islands cricket tournament at the main Arnos Vale Playing Field on Friday.

Batting at in a top order position of number six the tall left-hander stroked an unbeaten 150 as he registered the highest score by a Vincentian at the Arnos Vale Playing Field in its 43-year-old existence.

He arrived at the wicket with his team at 90/4 with the most experience batters, Romel Currency (6), Miles Bascombe (16) and captain Lindon James (5) all sitting under the “already dismissed” sign.

Cottoy first added 86 with Sunil Ambris (87) before Ambris, attempting a big hook, was bowled by left-arm spinner Dennis George to see the total 176/5 and with the departure of vice-captain Alston Bobb (5).

Fifteen runs later, things looked as choppy as the waters in the “Bequia Channel” on the blustery Friday morning. But Cottoy found an able partner in Kenneth Dember to reconstruct the innings then demolish the Grenada attack.

Overcoming some early anxious moments, the pair gradually took the initiative, and as the innings progressed, took their team into the ascendency with near perfect shot selection. Dember at times appeared a bit over cautious by refusing to attack over pitched deliveries from the now flagging bowlers.

The 25-year-old Cottoy, who picked up a hat trick in the Grenada first inning with his right-arm legspin, was not afraid to loft the ball over the infield on both sides of the wicket but his driving through the offside was what forced the gathering into shouts of appreciation and applause.

Played with a firm wrist off both front and back foot, Cottoy employed great timing in getting the ball to the boundary. He brought up his 50 in 111 minutes off 81 balls with 7 fours and his entire innings lasted 275 minutes he faced 212 balls and struck 18 fours and 2 sixes.

The partnership, which raised 192 for the seventh wicket, was broken when Dember (77) playing with much more freedom and possibly entertaining thoughts of a maiden century like his partner lofted a catch to outfield off the bowling of Derron Hypolite. Cottoy reached his 150 shortly after, at which point the match was called off with SVG 384/7 with Dawnley Grant (0) being his partner.

Over at the Sion Hill Playing Field, Dominica beat St. Lucia by an innings and 61 runs before tea on the final day.

Dominica, who resumed overnight on 141/2, went on to declare 324/8 with opener Jelarni Robinson turning his unbeaten 81 into a magnificent 152, which included 8 fours and 5 sixes. Offspinner Dalton Polius finished with 4/104.

Faced with a deficit of 125, St. Lucia were shot out for 60 by seamer Mervin Mathew 5/19 and ofspinner Shane Shillingford 4/12 to give their opponents a comprehensive victory and move top of the standings with 19 points.