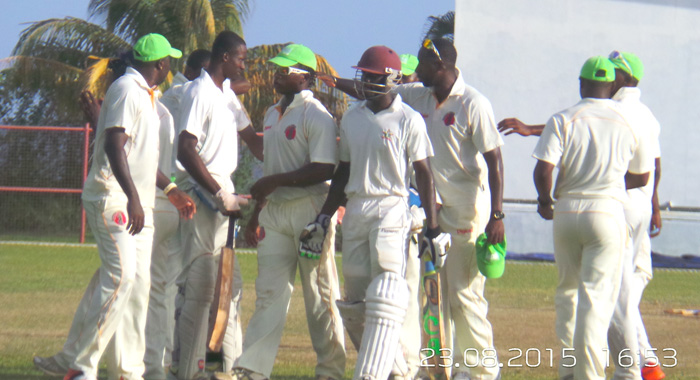 Defending champions, Dominica all but retained their title Senior Windward Islands cricket title with an emphatic 271-run victory over Grenada on the final day of their second round match at the Arnos Vale Playing Field on Sunday.

Set 345 in a minimum of 44 overs, Grenada were shot out for 73 in 37 overs with Andre Fletcher hitting the topscore of 40 before being the last wicket to fall. They also batted with one man short after young batsman Emmanuel Stewart was forced to retire hurt after being struck on the side of the head by a lifting ball from the slippery Vincent Lewis.

Grenada were faced with the task of surviving a minimum of 44 overs to avoid an outright defeat or to score at 9 runs an over to get to the target.

They were badly roughed up by the Dominica newball bowlers of the experienced and deceptive Mervin Mathew and Lewis.

They not only intimidated the batsmen with the short stuff but bowled a tight line as well, which made run scoring a task on a pitch which saw many balls going through below the knee and at times even at ankle level. The left-armer Lewis generated impressive pace that resulted in the openers Devon Smith and Herron Campbell playing hurried defensive shots in addition to inflicting the injury on Stewart. Campbell was the first to go when he was caught at cover from a leading edge off the bowling of Lewis. Nikosi St. Hillaire then gloved a sharp lifter From Mathew to slip and Smith then was well taken low down at midon off Lewis. Stewart was then struck a nasty blow to the head and was lifted off the field, and to the Milton Cato Memorial Hospital for a precautionary scan. It was the second time that the little Grenadian was leaving the field in as many days having been struck on the leg while fielding art short-leg on Saturday.

Dennis Smith was then magnificently caught at fine-leg by Mather, who ran then threw a big frame to hold the ball inches from the ground much to the delight of his teammates, who mobbed him.

Fletcher played a lone hand battling the spin, pace and verbal attacks by the Dominican players as Umpired Goaland Greaves and Colbert McDonald could be seen constantly cautioning players as the tension got tight. But his approach and straight bat only sought to delay the inevitable as he too soon perished skying an attempted shot over midwicket to give Tryrone Theophile an easy catch.

Lewis who set up the win with his hostile opening burst ended with 3 for 5 from 5 overs, Shillingford 3/15 and Sebastien 2/21.

Earlier, resuming on 68/2, a lead of 104, the Dominicans moved quickly into the ascendancy to declare 308/8 just before tea for an overall lead of 345.

When play got going on Sunday’s second and final day, the match appeared to still be in the balance with Dominica holding a slight advantage with runs on the board on what looked a deteriorating pitch. Grenada would have been hoping for some early wickets, while the Dominica overnight pair of Kavem Hodge and Kevin James would have been looking for things to go in the other direction.

James (23) who struck 2 sixes — the 12 runs added to the overnight total — was first to go LBW to left-arm spinner Denis George to make the score 80/3.

Captain Liam Sebastien (52) who has endured a miserable time with the bat, chose the right time to come good with a well played half century as he added 103 with Hodge for the fourth wicket. He struck 7 fours before lofting a ball to midoff from the bowling of Josh Hamilton.

Hodge, who also played with great assurance, looked on course for a century when he went to lunch unbeaten on 76 and the total 221/4. But he went back two balls after the resumption when in playing a defensive shot to Derron Hypolite he could only watch as the ball rolled back onto the stumps dislodging the bails in the process.

Kershaki Jn Lewis, who had joined Hodge in the morning session, continued Dominica’s impressive batting performance by hitting 70-the declaration coming with his dismissal.

He had added 61 for the sixth wicket with the diminutive wicketkeeper Gian Benjamin (19) before the latter went with the total 281. Jn Lewis struck 7 fours and 2 sixes in his innings, batted 150 minutes and faced 116 balls.

The win pits Dominica onto 35 points with one match against host and second place SVG to be played. SVG are on 27 points.