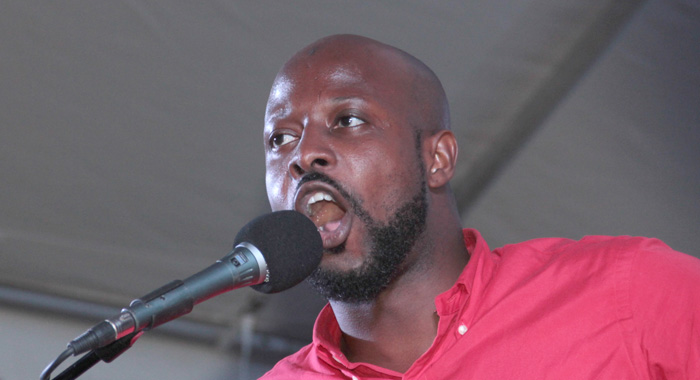 The Unity Labour Party’s candidate for North Leeward, Carlos James, has accused residents of some of the traditionally richer areas of St. Vincent of not wanting the government to help poor Vincentians.

James made the accusation at a ULP rally in Chateaubelair as he painted “a narrative of Labour love, reflected through its policies over the last 14 years”.

He said that the ULP administration has spent more on social welfare programmes, including Public Assistance, which has increased from EC$10 million annually in 2001 to more than EC$25 million in 2014.

“What that says to you is that the elderly, the poor and marginalised, the vulnerable, many of them who are from North Windward and North Leeward, where we have the highest … level of poverty, we have increased the budget to take care of these elderly and poor people,” said James, a first-time candidate.

He said that when the ULP took office, extreme poverty was over 25 per cent, but it has since been reduced to 2.9 per cent.

“Comrades, what that is telling you is that you have a government that loves poor people.”

He also mentioned the Lives to Live Programme, under which the government constructs bathrooms and toilets inside the houses of poor Vincentians.

“When we put on toilets and bathrooms on houses for a man like Arnold Cyrus, a blind man from Troumaca, Mr Murray, who had a stroke in Fitz Hughes, Massy in Petit Bordel, who is disabled from a stroke, when we put bathrooms and toilets onto their house, the NDP upset…

“Comrades, what the ULP is doing, it is doing for you, the people of North Leeward and the poorer class of people and the marginalised people in this country,” James said.

“You see, the NDP, comrades — I see Luke Browne here but he is not a part of what ah going tell yo’ — they sit in their little groups and have coffee overlooking Bequia in Cane Garden and up in Queen’s Drive and Ratho Mill and they complain about the government spending too much money to help poor people and spending too much money to send poor people children off to universities. They want more of the money to come to Kingstown for the business class,” said James, whose primary residence in St. Vincent over the last decade or so has been Cane Hall.

James said that the ULP spends money to enrich the poor and marginalised and ensure a better standard of living for them.

“But the bunch of elites, who have Arnhim Eustace on a string like a puppet, they are the ones who are most disgruntled. Not the poor people who are getting the help. And we have to recognise and understand that. If you don’t vote for Labour, you allow them people in East St. George, in East Kingstown, in Queen’s Drive and those people in Cane Garden to benefit more than the people of North Leeward and North Windward.

“I know Luke Browne probably would not like to hear me say that. But the people in Malla Village and those in Murray’s Village who going vote for him agree with me too.”

Browne lives in Cane Garden and seemed to have been surprised by James’ statement.

“We have to ensure that the ULP stays in office so that it can continue its mandate of pro-poor policies and policies that benefit the poor and marginalised,” James said.

Correction: An earlier version of this story said James’ primary residence in St. Vincent over the last decade or so has been Queen’s Drive. It is actually Cane Hall.