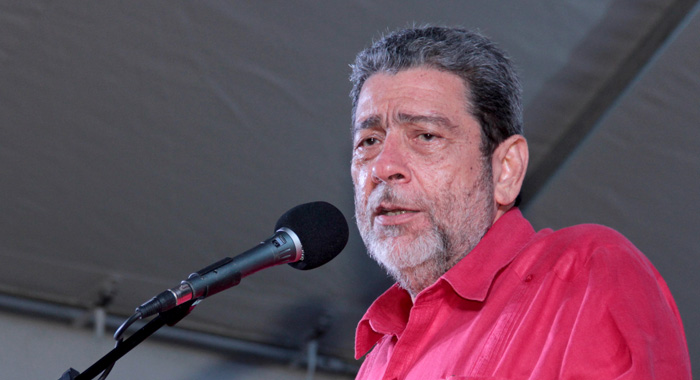 The Government of St. Vincent and the Grenadines (SVG) will give money and Bailey bridges to Dominica in the aftermath of Tropical Storm Erika, which left at least 20 dead and millions in damage and loss last week.

“Dominica is suffering and we have to help them,” Prime Minister Ralph Gonsalves told a campaign rally Sunday night in Chateaubelair, a town that was severely affected by the trough system of December 2013.

Gonsalves said he has spoken to his Dominican counterpart, Roosevelt Skeritt since the storm.

“I gave certain advice. He is a good leader — Roosevelt Skeritt, my very good friend, and we shared ideas on some things to be done,” he said.

“St. Vincent and the Grenadines is going to send a monetary contribution,” Gonsalves said, but did not say how much the nation will contribute to the fellow OECS and CARICOM member.

He said Kingstown is also discussing sending, through the Pan-American Health Organization, medical personnel to Dominica.

Gonsalves said he is expecting by Tuesday a report on the number of Bailey bridges in stock, saying that his government needs to use three to build temporary crossings in Byera, Cumberland and Mt Young, where new bridges are being built.

“And we have a few more in stock and we will have to give our comrades in Dominica some Bailey bridges,” Gonsalves said.

He told party supporters and media audiences that he has spoken to the Eastern Caribbean Group of Companies, which has agreed to send to Dominica a lot of flour, rice and animal feed from St. Vincent and rice from their associate company in Guyana.

The Prime Minister also announced that Minister of Foreign Affairs, Sen. Camillo Gonsalves is seeking to put together a big cultural rally to raise money for Dominica.

“The last time when he worked with other persons in the entertainment field, we raised about $200,000. I am hoping that we can do more than that this time and to package it very attractively,” he said in reference to the concert held in 2014 after the 2013 trough system.

Gonsalves also said he was using the address at the rally to ask the president of the SVG Football Federation to collect donations at the game at Arnos Vale on Friday where SVG is playing Aruba in a FIFA World Cup qualifier match.

“There are other things which I would announce as the time goes by,” Gonsalves said.