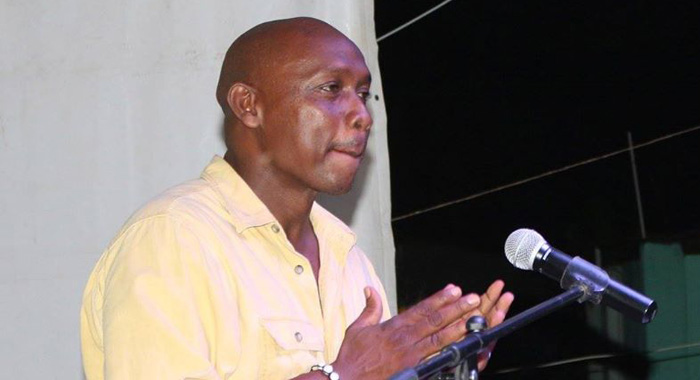 “This programme is designed to empower our young people. The goal of this programme is to build a database of the youth with whom we can work to enhance your self-esteem, employment capability and provide you with the tools for leadership,” Baptiste told an NDP rally at Langley Park held to launch the programme.

“The NDP will replicate and improve this programme across St. Vincent and the Grenadines but I am very pleased tonight that North Windward has been selected to pilot this programme,” he said.

Baptiste, a first-time candidate, told the gathering that he was confident that he will win the seat, which has been held by the Unity Labour Party’s Montgomery Daniel since 2001, adding that it will be the first in the NDP bag come election night.

“Too many of you, as young people of our country, are left to struggle. After you have gone to school to get an education, to find a job, to own lands, to own a home, to have access to the basic items that you can live a better life and help you to … soar like and eagle,” he said.

“Too many of us are becoming 40 and 50-year-old adults before owning anything in this country except that you travel abroad.”

He said that as a result of YEP, he wants to see persons in their late teens and early 20s owning businesses, lands, and homes.

The ULP administration is like looking at a locked door, Baptiste said, adding that there is another access to “the building of prosperity and that is the NDP…

“Too many of our young people are caught in the poverty trap set by this ULP administration. So they force us to join the line like out by ‘Gomery office and line up in the begging line.”

Baptiste said the NDP is saying it doesn’t want that to exist anymore in the country and that he wants to move constituents “from beggar days to better days”.

Baptiste reiterated that an NDP administration will pay students’ CXC and CAPE fees.

YEP will generate renewed emphasis on tourism development in North Windward and nationally, and, using a scientific approach, will reposition agriculture to accomplish food safety, security and economic sustainability, said Baptiste, an agriculturalist.

Baptiste also restated the NDP’s promise to revitalise the banana industry — replanting 1,000 acres of bananas in the first year and replicating this annually.

“The New Democratic Party is a farmers’ party,” he said, adding that an NDP administration will repair and reactivate the irrigation system.

He said that party will intensify the diversification of agriculture around bananas and root crops, and reactivate the cassava plant at Orange Hill.

It will also spearhead the enlargement of livestock farming in North Leeward, introduce a backyard gardening programme in schools, reactivate the farmer’s training centre in Orange Hill and revitalise cottage industries.

The party will also reactivate the EC$35 million fisheries complex at Owia, which the government has identified for lease.

It will also equip 12 fishermen with pirogue and 75hp outboard engines to boost the fishing industry in the community.

He said he will co-ordinate with diaspora communities to provide scholarships based on merit, rather than political affiliation, to students of North Windward.

On the issue of scholarships, Baptiste suggested that constituents pose a question to their MP:

“Ask him who were the last two persons to receive the Indigenous People’s Scholarship. They are not from the constituency.”

Among other things, Baptiste promised a clinic in Langley Park and to upgrade the ambulance service in North Windward.

He said he will stress maintenance of public infrastructure, adding that the ULP builds but does not maintain.

“Just like the voters as well, all of their supporters. They only want them to vote for them but they do not maintain them either and that is why we are going to vote them out in the next election.”

Baptiste, a former national cricketer, said he will refocus attention on the development of sports and will construct a playing field for Dickson and Langley Park.

He said this was a promise that Daniel made in 2001 and told constituents that they should not be surprised if land surveyors come now that he has made the announcement.

“Since my entrance in politics four years ago, you the people of North Leeward have been reaping a lot of benefits all because of Sharer. Put your hands together for Sharer.

“Because of me, Gomery is most busy in his 14 years of politics. It’s the most galvanise and cement and lumber ever share away in this constituency, and is because of who?” he said, as the crowd responded “Sharer”.

Prime Minister Ralph Gonsalves has said that he will allow Vincentians to vote this year, ahead of the March 2016 constitutional deadline.