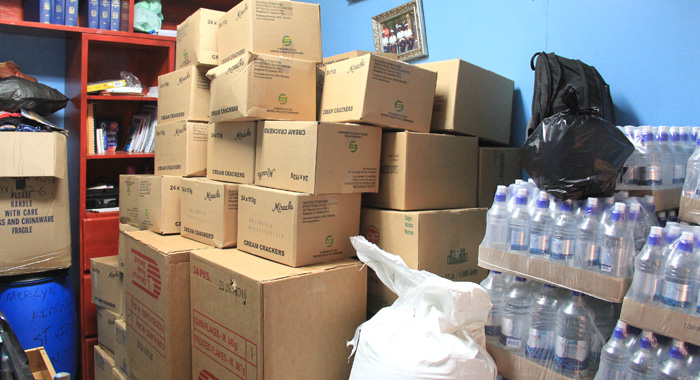 The Police Welfare Association will Wednesday send EC$10,000 in aid to their colleagues in Dominica. (IWN photo)

Efforts have begun in St. Vincent and the Grenadines (SVG) to mobilise help for Dominica, which was ravaged by tropical storm Erika on Thursday, resulting in the deaths of 25 persons and millions in damage and loss.

Rescue teams are still searching for at least 23 people, including two French nationals.

NEMO and the SVG Red Cross will be collecting the following items from Wednesday to Monday:

The priority list is based on information submitted by the Emergency Operations Centre (EOC) of Dominica, NEMO said in a statement.

Persons who wish to donate these items are asked to drop them off at NEMO’s office at Old Montrose, NEMO’s warehouse at Campden Park (near Rudy’s Electrical) and at the SVG Red Cross Society’s office in Kingstown.

Meanwhile, the Police Welfare Association will on Wednesday (today) ship EC$10,000 in aid to their colleagues in Dominica who were affected by the storm.

Head of the Police Welfare Association of the Royal St. Vincent and the Grenadines Police Force, Inspector Trevor Bailey, told I-Witness News on Tuesday that the association held a general meeting on Monday and its members spend in excess of $10,000 to buy the items for their colleagues in Dominica.

He said the Barbados Coastguard is expected to visit St. Vincent on Wednesday and transport the items to Dominica.

“This is going straight to the police officers in Dominica — to their Welfare Association,” Bailey said.

Meanwhile, the Division of Physical Education and Sports said on Tuesday that it has embarked on a drive, in collaboration with SVG Football Federation, to provide assistance to those in need in Dominica.

Financial donations from the public will be solicited at the World Cup qualifying match, Vincy Heat versus Aruba, on Friday at the Arnos Vale Sporting Complex.

“A donation receptacle will be placed at each entrance in which patrons may drop their contributions.

Stewards will be going through the stands to collect donations at several points during the match.

“The Ministry of Sports is appealing to all who will be at the game, for a show of solidarity and compassion, for our friends in Dominica, as we too know what the effects of natural disasters can be, with our recent experience on Christmas Eve, 2013,” the division said in a release.

“The Ministry anticipates a tremendous show of support at the game, not only for Vincy Heat, but also for our Dominican brothers and sisters,” the release said.

On Sunday, Prime Minister Ralph Gonsalves announced that his government will make a financial donation to Dominica, in addition to Bailey bridges.

One reply on “St. Vincent mobilising to help Dominica after TS Erika”