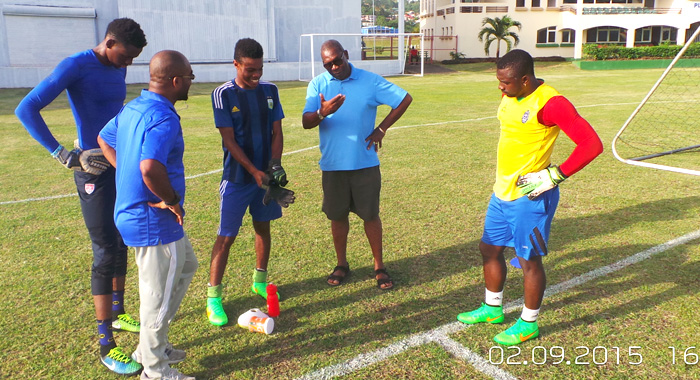 Vincentians are expected to flock to the Arnos Vale Sports Complex Friday (today) in their thousands wearing the national colours – blue, yellow and green — in support of the senior national men’s team, “Vincy Heat”.

The team will be taking on Aruba at 3:30 p.m. in the first leg of the Russia 2018 World Cup Qualifiers for a spot in the next round and a face-off with CONCACAF powerhouse the United States beckoning.

The second leg of the tie will take place next Tuesday with the winners over the two legs advancing to a Group featuring the United States, Trinidad and Tobago, and either Guatemala or Antigua. This will be played on a home and away basis and should get going in November.

The Vincentians advanced to this stage after a controversial win over Guyana Golden Jaguars on the away goals rule after the two teams had played to a 2-2 draw at Arnos Vale and a 4-4 draw in Guyana.

The controversy stemmed from the protest by the GFF over what they claimed was the fielding of an ineligible player, UK-based Gavin James by SVG.

James, who did not have an SVG passport at the time, was allowed to take the field with a British passport bearing a stamp for Immigrations officials in SVG stating that he is a citizen of SVG.

FIFA Disciplinary committee, which ruled in favour of SVG, subsequently fined the SVGFF US$5,000 and a further US$1,000 in legal fees.

The GFF, which said it has sought legal advice on the matter, has pledged to pursue it if possible to the Court of Arbitration for Sports.

But on the field SVG has expressed confidence of winning at home. Coach Corneilus Huggins said that his team was in high spirit despite squandering a two-goal lead in a friendly last Friday against Barbados at Victoria Park to come away with a 2-2 draw.

he said that while everyone was saying that the defence allowed the game to slip away the job to defend is not only for “the four guys in the back.

“You are supposed to defend as a team not some doing so and some taking it easy. That is why it is called teamwork and that was our downfall on Friday. But we have worked on that and, hopefully, the guys will not make that mistake again,” Huggins said.

He said that the team is fit and confident but will missing Myron Samuel who suffered a broken foot in his debut match with Sounders FC2 two weeks ago.

Huggins, however, said he feels that the team has enough firepower upfront perform in the absence of the striker, whom he described as “very, very good”.

Huggins said that his team had no injury worries and would be going into the match with the intention of imposing themselves on their opponents from early.

He is, however, warning his team and the fans against looking past Aruba to the next round.

“This a game on the field and if we go there and take this team for granted, they could well hurt us. So I have asked the players to take the game seriously and to convert our chances when we get them,” he said.

He said the players at his disposal, especially the strikers, have proven their worth, with Finland-based Corneilus Stewart, Sounders FC Oalex Anderson, Tevin Slater, Emerald George and UK-based Gavin James all having found the net in national colours and this is a good thing going into the match. The former ace defender said that while they have given up a few goals, he expects the defence to rise to the occasion by marking closely and covering each other, while sticking to the basic.

Local football officials say that during the match there would be a collection made to assist the flood victims in Dominica where Tropical Storm Erika has left 23 people dead and causing millions of dollars in damage to property.