Leacock says he is an ‘outstanding’ representative of Central Kingstown 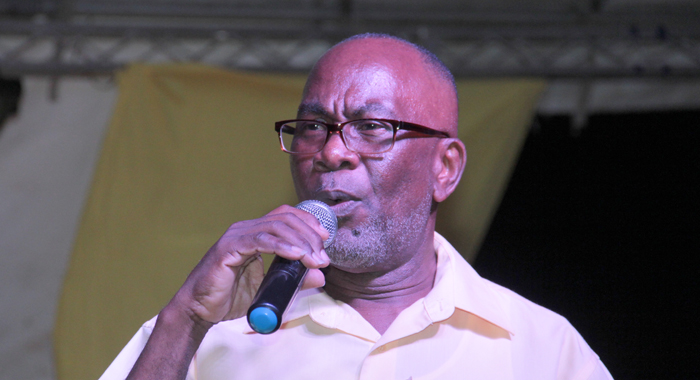 Leacock, a vice-president of the main opposition New Democratic Party (NDP), told party supporters at a rally in Redemption Sharpes that he is confident of victory at the next polls.

“And I assure you tonight, with all the confidence that I can offer, that come the general elections, whether it is October, November or December the 7th, I will be returned in Central Kingstown by an even larger margin than I was voted in the last election,” he said.

Prime Minister Ralph Gonsalves has said that elections will be called this year, ahead of the March 2016 constitutional deadline.

Saying that he is a senior member of the NDP both in years and service, Leacock told the rally that he thinks of himself as a senior statesman in the NDP.

He said this means that he has additional responsibilities to the leader, the party, and the electorate.

Leacock traced his experience back to 1979, when he said he took part in three significant events.

At age 28, as a member of the Cadet Force, he was responsible for the evacuation, safety and protection of 20,000 Vincentians after the eruption of La Soufriere, Leacock said.

He was also in uniform during the Union Island Uprising, and later that year was in charge of all foreign forces on parade at Independence.

Leacock said he was giving that background as to show why he is a “major”, a rank he attained in the Cadet Force.

He noted that he has received military training in Trinidad, Barbados, Guyana, Canada and Venezuela, and Japan.

“The gentleman that represents you here is deeply trained in the military, highly disciplined, internationally exposed and well positioned to serve you, the people of Central Kingstown,” he said.

Leacock noted that in addition to his military training, he holds a first degree in management of business and a master’s degree in business administration, specialising in finance and human resource.

He said that in 2001, he was finishing a doctorate in business and a law degree when Eustace asked him to come home and join him in leading the NDP.

Leacock said that Eustace had walked away from $500,000 in salaries. “And I said if he could do it, what was the sacrifice of a doctorate and a law degree to stand shoulder to shoulder with Mr. Eustace,” Leacock said.

“Today, I have walked you that journey for a good reason. Not to promote myself, because I could do that in an easier way…” he told party supporters.

“In fact, the situation is so bad in Central Kingstown that there is really no need for me to call the name of who I am running against because there is no comparison. If the truth be told, they have made that decision or you,” Leacock said.

Leacock first faced the polls in 2005, when the ULP’s Conrad Sayers defeated him by 16 votes to secure a second term in office.

“Charlo came to you and he said he will do this, he will do that and the other. And you gave him support. Decent young man, albeit misguided.

“But 2015, there is no Charlo, there is someone else … The point is, they removed him from the Parliament, and who did they replace him with? Camillo Gonsalves,” Leacock said.

Camillo Gonsalves, son of Prime Minister Ralph Gonsalves, was appointed a senator and Minster of Foreign Affairs in 2013, when the ULP replaced the three senators — including Charles — it appointed after the 2010 elections.

The younger Gonsalves is the ULP’s candidate for West St. George, having replaced incumbent area representative, Clayton Burgin, also of the ULP.

“Again, it is not my fault that Linton Lewis (NDP candidate for West St. George … much more reflect what you want your children to be than Camillo will ever be. Those are not my responsibilities.”

“… they will like us to believe in the [NDP] that we come out of hollow tree, we had no youth, we had no experience, we had no training. Well, I put it to you beyond the shadow of a doubt, every single one of us, man for man, presents a more equipped and competent and talented team to take St. Vincent out of the doldrums that it is in,” Leacock said.

He said his politics is a about the over 30,000 people who support the NDP “and go hungry and have sleepless nights and have had great sacrifices to stand behind this institution called the New Democratic Party.

“And it must, therefore, be the solemn promise of every one of us, led by the Honourable Arnhim Eustace, to restore decency dignity and pride by putting St. Vincent and the Grenadines to work,” Leacock said.

He said that he can speak of his record in opposition and the issues he has championed, including repeated calls for removal of the fuel surcharge on electricity, a constituency development fund, and a public healthcare facility in Central Kingstown separate from Milton Cato Memorial Hospital.

“… I am going further now to say that if a New Democratic and when a New Democratic Party government is in office and geothermal energy comes into being, we will remove for all time that word call fuel surcharge off he backs of all people of St. Vincent and the Grenadines.

“Because if we can produce enough energy to sell to others, we should not be paying for any energy consumed in St. Vincent and the Grenadines through inefficient operation,” Leacock said.

He said he has been an important member of the NDP team that has spoken about a social, spiritual and redemption charter.

“I have said that because if we look at the St. Vincent and the Grenadines that we live in today, socially, we are in disarray.

“Over 5,000 of our decent people have had to take their belly and make boat to be in Canada, in Tortola, Barbados, in Trinidad and Tobago and anywhere they can find a living, but in the country of their birth, to which they should have first claim.

“It has separated mother from daughter, husband from son, and whole families will never be united again because of Ralph E. Gonsalves and the ULP setting our people astray because they could not find work her because of his heavy victimisation.

“The New Democratic Party will redeem St. Vincent and repatriate those people if they so want to come back to their home land and be entitled in a meritocracy way to working in their homeland,” Leacock said.