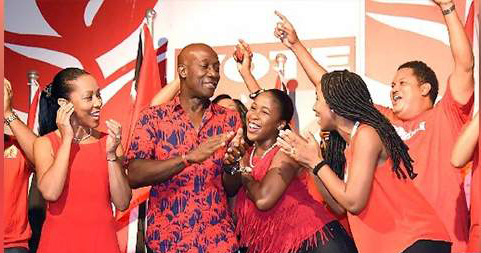 PORT OF SPAIN (CMC) – Leader of the People’s National Movement (PNM), Keith Rowley, says he intends to be a prime minister for the entire country as his party won the general election here on Monday.

“I will make every effort to rekindle the feeling of nationalism in Trinidad and Tobago … all of us should be proud that we are citizens of Trinidad and Tobago,” Rowley told jubilant supporters as the party carved out a 23-18 victory in the poll.

“We must respect the wishes of the people of Trinidad and Tobago, they have chosen and I respect their wishes.

“Of course we would be disappointed with the results but we must respect the democratic process and I wish everyone in our country the best wishes I can give for a better tomorrow and a better future.”

She said that the coalition, comprising the United National Congress (UNC), the Congress of the People (COP), the Tobago Organization of the People (TOP) and the National Joint Action Movement (NJAC), had done much during its five-year term in office.

“We will have a very strong membership in the House and we will continue to work for you and to serve you. I thank you very much and I ask you to respect the wishes of the people, the majority of the people in Trinidad and Tobago,” she said, adding that the coalition had won the popular vote.

“At the end of the day the way our system is framed it is the majority of seats that affords you the opportunity to form the government. So I wish the new government well and I also tell you that I will not stop serving you, I will continue to work with you,” she added.

He described the victory as a “humble experience” to lead the party into “what has been one of the most gruelling elections in the history of our country and coming out of it victorious tonight.

“I am humbled, I am very grateful,” he said, noting that the party had not lost faith “when things were not looking too bright.

“I think this election in our 60th year demonstrates that the PNM can keep its shape,” he said, noting that five years ago, the party was soundly defeated at the polls.

“We were down but we were never out. We knew we were always the party of the long haul and sometimes the runner stumbles and even when the runner falls the tape is always on his mind,” he added.

Rowley said he had also sought to impress on the general population that “the value of the PNM is to be available to the people of Trinidad and Tobago whenever you need to call on us.

“Once again the people of Trinidad and Tobago have called on the People’s National Movement,” he said, noting that while the majority of the new legislators are new to Parliament “all of us, new and old, young and not so young, we will be guided by the fundamental principles f the People’s National Movement and the Constitution of Trinidad and Tobago”.

He said throughout the campaign, the PNM had made it clear “these are not the time of milk and honey, there are difficult times ahead.

“It is like going down the river and I am telling you that there are rapids ahead, there’s rough water ahead there are white water sections ahead, but if we navigate them successfully there’s calm waters ahead,” he said insisting that “our country is not a basket case.

“We have a fair amount of resources, we have a resilient people, particularly a large body of young people who are looking for a future from our country.

“We will succeed not basically on who is in office or who won the election, but more importantly how we behave as a people in treating with the challenges ahead,” he added.

He compared the victory to a marriage, saying “a wedding is a feast, it is a fete good speeches around, the wedding is the beginning, it is the living that matters, let’s live together in harmony”.

PNM supporters have taken to the streets in celebration, honking car horns and waving flags and Rowley said “we have taken the responsibility of offering ourselves and now we will proceed with what we outlined in our manifesto given the circumstances that have developed bearing in mind all the time that we do not govern for ourselves but we are servants of the people of Trinidad and Tobago”.