Vincy Heat in Aruba affair before date with US 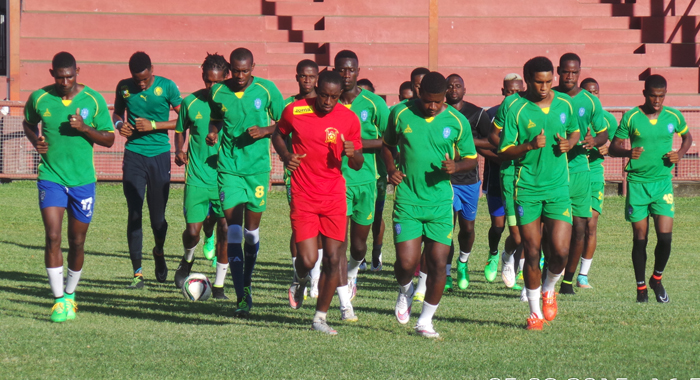 In just a few hours Vincentian football fans will know if they will get a chance to see the mighty United States battling their team, “Vincy Heat” in the humble Arnos Vale Sports Complex in CONCACF Zone Russia 2018 World Cup Qualifiers.

The desire and expectations of those fans can only be realised if “Vincy Heat” wrap up their tie against Aruba in Oranjestad Tuesday evening.

The Vincentians go into this evening’s match with a two-goal advantage by virtue of their 2-0 win last Friday at Arnos Vale. The win was achieved through second half strikes by Footballer of the Year, Tevin Slater (51st minute), and Oalex Anderson (90th minute penalty).

The SVG team, which left Sunday morning fir Aruba, just need a draw to advance to the next round where they will meet CONCACAF perennial powerhouse United States, Trinidad and Tobago and either Antigua or Guatemala on a home and away basis from November.

Coach Cornelius Huggins said that his team will be going all out for a victory and would be playing positive football.

Huggins said that there are no injury worries and the team was confident going into this evening’s match. He said that even though his team are in a good position after their victory, they will not be taking things lightly.

“We will be going into this match with one thing on our mind and that is to kill off these. We have no intention of going there and try to play safe for the 90 minutes. We are going play our natural game,” he said.

Huggins, while trying to focus on this evening’s return leg, could not help but look though fleetingly to an encounter against the United States.

“We have to get this match out of the way before we can look at taking on the USA, but to play them would be a great thing for our players. There would be scouts looking at our guys and that could mean an opportunity to make some money and develop your career,” said Huggins, who played for many years in the Malaysia Super league.

The former ace defender said that playing against teams that is higher ranked than them will also provide the opportunity for the players and the coaching staff to learn and develop their skills.

He said that SVG has the talent to compete with the best but the players need to be more focused and serious about their game.

“They have to adopt a professional attitude and show a willingness to want to learn,” he said.

This evening’s game is set to get going from eight.