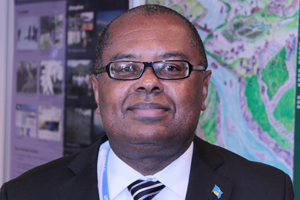 PARIS — St. Lucia’s Minister for Sustainable Development, James Fletcher, is chairing a discussion in Paris focused on adaptation to and loss and damage as a result of climate change, and means of implementation, including finance, technology transfer and capacity building.

The discussion forms part of the second informal ministerial meeting on climate change, convened by French Minister of Foreign Affairs Laurent Fabius, who is also president of the 21st Conference of the Parties (COP21) of the United Nations Framework Convention on Climate Change (UNFCCC).

The informal talks come as the parties prepare for COP21 here in December.

Small island developing states such as those in the Caribbean hope that at COP21 parties will agree to a legally binding climate deal that will keep global temperature rise to below 2 degrees Celsius higher than pre-industrialisation levels.

The second climate change ministerial, like the first held in Paris in July, is seeking to establish areas of convergence on some of the key issues dominating the negotiations.

The discussions on adaptation and loss and damage are being jointly chaired by Fletcher, who also has ministerial responsibilities for Energy, Science and Technology, and Pablo Abba Vieira Samper, Colombia’s Vice Minister for the Environment.

The issue of loss and damage is a critical one for small island nations and low-lying states that make up the Alliance of Small Island States (AOSIS).

For several years, Small Island Developing States (SIDS) have made a case for official recognition of loss and damage in climate change decisions.

Loss and damage refers to the irreversible impacts of climate change from extreme weather events and slow onset events, such as sea level rise and ocean acidification. In Warsaw, Poland at COP19, the Warsaw International Mechanism on Loss and Damage (WIM) was established to oversee initial work in this area.