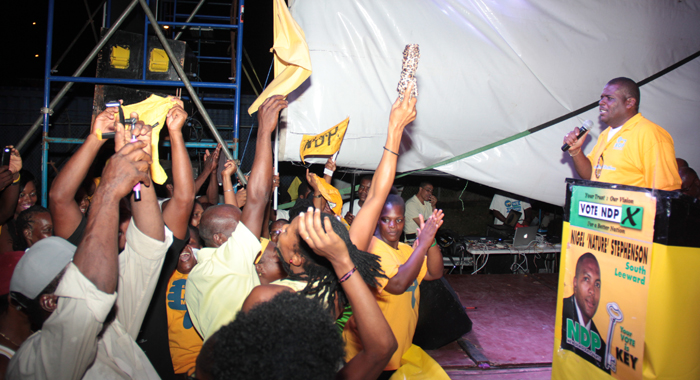 MP for North Leeward, Roland “Patel” Matthews, on Saturday remained defiant, one day after receiving a letter from his challenger, Carlos James, demanding an apology for calling James a “criminal” one week earlier.

Lawyers for James, the ruling Unity Labour Party’s (ULP) candidate for North Leeward, have written to Matthews, demanding an apology and payment of money to a charitable organisation for the statement he made at a campaign rally on Sept. 5

But Matthews used the words of a Bob Marley song to respond the letter at a rally of his New Democratic Party (NDP) in Campden Park.

“You know, Bob Marley sang a song. DJ, tell me how the Marley go again,” Matthews said, as the DJ played the first lines of Marley’s “Bad Card: “You a-go tired fe see me face;/Can’t get me out of the race.”

“Tell them,” Matthews said as the crowd cheered and he sang the lines of the reggae hit.

Matthews’ Sept. 5, comments are believed to refer a conviction that James had for indecent language for which he paid EC$100 in 2003 while he was a reporter at Searchlight newspaper.

James’ criminal record was spent in 2009 as a result of the Rehabilitation of Offenders Act.

Matthews also said James did not meet the requirement of living in a constituency for six months when he transferred his voter registration from West St. George to North Leeward last year.

He told party supporters that he   interpreted the lawyers’ letter to say that James is not registered in the wrong constituency because his family is from North Leeward and he grew up in the constituency.

“I am sure that many of you, you grow up in an area, but you registered to vote somewhere else, nah so? Good. But you notice they didn’t say born in the area, because you know why? They don’t belong to that,” Matthews said.

“But hear nuh. It doesn’t matter what they do,” Matthews said.

“They could write letter; they could send threats. I am giving a message to them tonight: Regardless of what they do, the people of North of North Leeward, when election come, they will elect yours truly Roland “Patel” Matthews as the Member of Parliament. Ne nah ‘fraid a soul; Richard Williams, me nah ‘fraid yo’ letter neither. Carlos James, yo not living in North Leeward and I say it bold,” Matthews said.