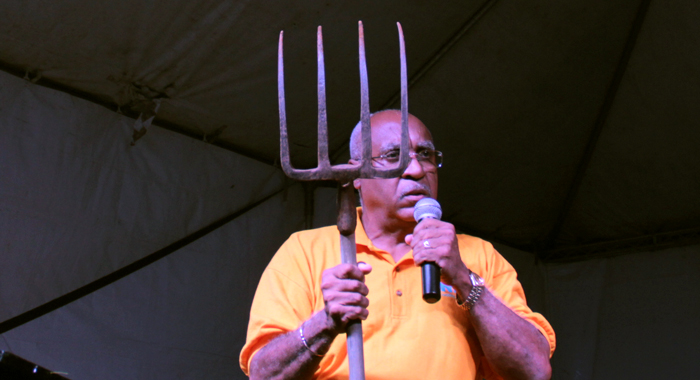 Speaking at a non-commissioned officers’ conference in Kingstown on Wednesday, Gonsalves, who is also Minister of National Security, said:

“We’re going to have an election shortly. I want to say this: Policemen and women are entitled to their own opinion and their own choices but what they are not entitled to do is use the police station and in the conduct of their duties as hubs of political propaganda, and worse, in the conduct of their duties, they function in a partisan political manner.”

But Ferdinand, a first-time candidate, took issues with that statement, and expressed his views at the NDP rally in Campden Park Saturday night.

“Imagine the prime minister saying that, when senior police officers going with him are dressed in red. You can’t tell me that this is honesty. This is the height of dishonesty. Shameful! Dishonesty!” Ferdinand said.

“And so, I bring a tool to tell you that we are going to dig them out.

“We will dig them out with this,” Ferdinand said as he raised a garden fork into the air.

He said the garden fork “signals another important message to us as a people.

“When I looked on Facebook after the Youth Arm of the ULP (Unity Labour Party) had its convention, a lot of them were showing the sign of the four fingers.

“They had gone with three and they want a fourth. We say three, and no more. No four! No more!” Ferdinand said.

“But hear, they must look at this, because this has four prongs,” he said, holding up the fork again.

He said originally the fork had a wooden hand, and told party supporters that the NDP left the ULP with a surplus in the Treasury, which, he said, the ULP “bad spent, like they broke the wooden handle” of the fork.

“We put on a stronger handle. They can’t break this,” he said, referring to the metal handle in the fork.

Ferdinand said the ULP always talks about their leader.

Ferdinand said that when he goes around St. Vincent and the Grenadines, people who are perceived to be common and unlearnt are thinking people “and they know that even though they will come with the galvanize and the cement and the lumber and the steel and the blocks, that that can’t stop what is happening. There is a swing! There is a swing!”

He said that after being elected in 2001, the ULP said “together now” but went and destroyed families.

“What kind of ‘Together Now’ is that?”

Ferdinand said the ULP promised to be hard on crime and its causes.

“And they turned a blind eye. Yes and the integrity legislation, which they championed before 2001, they are silent on it. But they know why,” he said.

But he said the ULP mantra that he finds very distasteful is the “Own De Government” slogan that it used after the 2010 general elections.

“You know what that really came out to be? Own the government money! You have people here in government, supporters of the ULP, but really and truly, it doesn’t matter who they support, because this Arnhim Eustace, I can tell you, I know him well enough to know that is anybody in his party put their hand in the till, he going deal with them,” Ferdinand said.