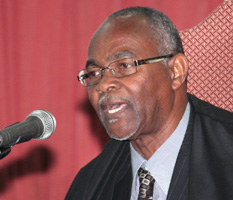 The main opposition New Democratic Party says it is considering its options as the House Speaker has disallowed a question about loans owed to the former, then state-owned National Commercial Bank (NCB).

In 2010, the Ralph Gonsalves government sold 51 percent of the bank, which has been rebranded Bank of St. Vincent and the Grenadines.

Leader of the Opposition, Arnhim Eustace, says he wants answers about some EC$6 millions in loans held by former directors, including Desmond Morgan — husband of Attorney General, Judith Jones-Morgan – whose company owed some EC$2.2 million.

He said he wants the government to tell Parliament if the loans are being repaid.

He submitted to the Parliament last week a question for inclusion on the Order Paper for a sitting of Parliament later this month.

Eustace told an NDP campaign rally in Campden Park on that House Speaker, Hendrick Alexander, has rejected the question.

“I simply want to find out, have these loans been paid have they been forgiven, what has happened to them? We are talking about six million dollars,” he said.

He added that Building & Loan Association — an indigenous financial institution that is being managed by the Financial Services Authority, a state agency — is selling the properties of persons who owe less than NCB directors owed to the bank.

“Why should other people owe very large sums of money and you can’t find out,” Eustace said.

“So the Speaker has sent a message to me yesterday (Friday) to tell me that he take the question off the Order Paper; I can’t ask the question in Parliament anymore. …

“And he [is] not giving any reason neither,” Eustace said.

Eustace, a former prime minister and minister of finance, maintained that he wants to know what is the status of the amounts owed.

“And ah not going to let them get off of that,” he told NDP supporters.

“They could block it in Parliament; that is something we may have to take the road on because of the seriousness of this kind of situation.

“That is why I say we have to straighten out the mental asylum, because some of this stupidness I am hearing now is real, real nonsense, and people must be brought to justice. Man going to jail for two tomatoes and somebody owing six million dollars and you can’t get an answer,” Eustace said.

He told the rally that the Speaker’s response suggests the need for “real special facilities” in the country, a reference to a mental asylum that Eustace said he has decided to fast track as a result of Gonsalves’ comments on his complaints about illegal voter transfers.