Question about lunch from landfill inspires service to Sion Hill 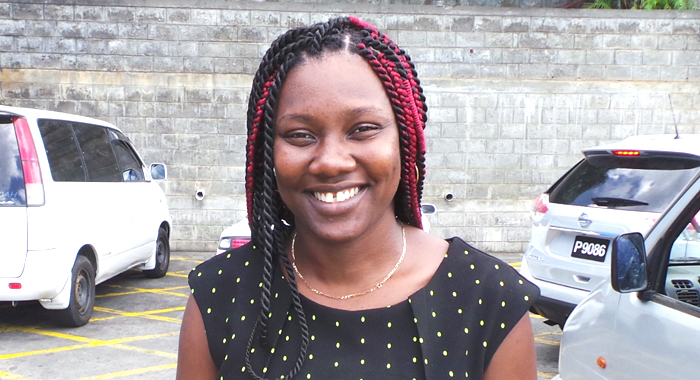 During her first week as a Girl High School student, one of Kimesha Davis’ friends asked her if she gets her lunch from the incinerator located in Sion Hill.

Davis, a resident of Walvaroo, one of the villages in Sion Hill, decided then that she would do whatever she can to change positively people’s view of her community.

More than a decade later, as a university student, Davis is doing that in a very tangible way, by trying to influence positively the young lives in her community.

Davis, a third-year psychology student at the University of the West Indies in Barbados, says her ambition is to devote her life to assisting less fortunate people.

The 24-year-old is the niece of former West Indies speedster, Winston Davis, a national sports icon, who represented the regional team in the 1980s in test and ODI.

The former pacer now uses a wheelchair after being injured in a freak accident in 1998 while clearing foliage with his church group at a site for the construction of a new building. Davis damaged his spine when he fell from a tree, which left him paralysed from the neck down.

Kimesha, who was just 7 years old at the time, was at the scene of the accident that day with her mother.

“I wasn’t sure what had happened although I was right there when it happened. Everything went down so quickly. For a while I thought he had died. I got to understand his condition better by picking up bits and pieces of conversations from adults,” she recalls 17 years later.

And what lessons did she learn from the accident?

“It of course impacted me negatively because here is a close family member, usually so active and vibrant, and his life is changed so drastically in an instant. It was sad to see. But it also helped me to appreciate people more and not take anyone for granted. I came to this conclusion, years after the incident, though. I guess with maturity and experience, I decided to find the positive side in it”.

While her uncle has been the standout member of her family, her father, Kenrick Whyttle, although not achieving such recognition, is well known for his contribution as a cricketer and umpire.

Kimesha’s brother, Rodger Davis, is a first class cricket umpire and her uncle, John Whyttle, also played cricket and did some umpiring as well.

Kimesha, despite coming from a family of sports personalities, only had a mild flirtation with sports — playing some netball in fun tournaments.

But while her involvement in sports appears limited when compared to the elders of her family, her desire to give service has few equals. This was borne out in August during her vacation when she held a one-week summer programme for the children in the Wlavaroo.

She says the idea to hold the programme came to her while thinking about the way of life of the children.

“I am from the area and come into contact with them on a regular basis so I am no stranger to what happens daily. So while in Barbados, I began putting together this programme for the summer with the aim of trying to improve their knowledge and to sensitise these children on certain aspects of life,” she explains.

While she catered for children 5 to 16, Kimesha was surprised on the opening day and through the the programme to see children with “feeding bottles” being brought along by older siblings.

She says that owing to the situation in the village, she could not turn them away. Since she wanted to teach the children, it meant that she had to accommodate both the baby and the sitter.

Her mother, Brenda, coming from the “old school” could be seen from time to time scolding a truant child or threatening to ask them to leave.

Kimesha would step in to “take it down a notch”.

Although she seems to be blessed with an enormous amount of patience, Kimesha admits that her level of tolerance was indeed taxed over the five days.

“Yes there were times when I had to talk to them hard, but knowing the background from which many of them come, I just had to go the extra mile to ensure that they remain part of the programme.”

She mentions an incident when one child, despite numerous attempts to have her behave in a accepted manner, continued to show poor behaviour. Kimesha sent the child home, but quickly went to bring her back because she felt the child would miss out on a chance to learn.

The programme covered areas such as personal hygiene, reading, crime and violence, conflict resolution with needlework, crochet and embroidery thrown in for good measures.

While saying that the week was successful, she is concerned, though, that the children have returned to the same environment and will most likely fall back into the same pattern of behaviour.

Kimesha speaks of some of the major problems she identified among the children over the one week.

“A lot of them lacked attention, appreciation and love and, in addition, they were always ready to settle little disagreements with violence, even in cases where a genuine accident may have occurred.”

And she recalls a chilling incident.

“One day I saw this boy with a screwdriver. So I asked why he had brought it and he said, ‘Miss, this is for if anybody hit me for me to stab them with.’”

She said that having taken the screwdriver away from the child, she told the minor of a fellow villager who is in prison for killing someone and impressed upon the child the negative fallout from violent actions.

But Kimesha is already looking at ways to deal with the problem.

“I am thinking about having a workshop for the parents when I come back for vacation, so as to expose them to different ways of dealing with some problems, because if the parents don’t change, the children are going to remain in the same situation”.

Kimesha, a former student of the Sion Hill Government School, passed what was then the Common Entrance Examination, placing 31st for girls and 53rd overall, earning her a place at the Girl High School (GHS).

She said that a conversation with another Form 1 student then made her realise that she had to make the effort to help her community.

“We had just gone into school and one day this girl came up to me and asked me if I get my lunch from the incinerator (That is what is now the Arnos Vale Landfill.) And this shocked me since both of us were in the same school. This question made me realise that Sion Hill Government School children are looked down upon and we don’t have that much effort put into us,” she explains.

Still visibly annoyed and somewhat amused over a decade after the incident, Kimesha said she forgives her fellow student whom she feels was driven by genuine curiosity more than mischief.

Leaving school with 10 subjects at CXC level, Kimesha was employed at the St. Vincent Co-operative Bank before heading off to Cave Hill, where her parents are funding her studies.

Her ambition at the end of her studies is to dedicate her life to helping people and trying to make her community a better place by looking at ways to deal with violent behaviour at an early age.