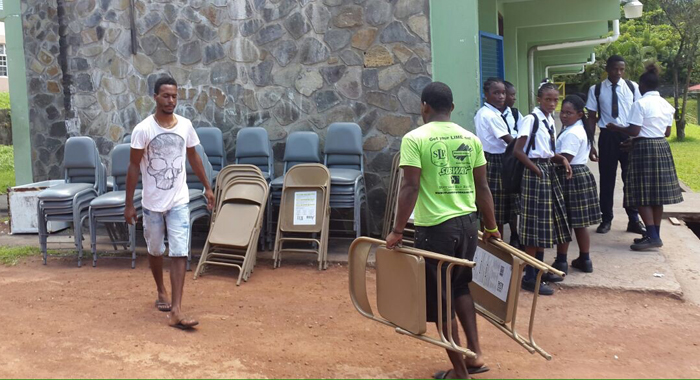 Chairs were delivered to the school on Tuesday, two days after I-Witness News broke a story about the situation.

Fourth and fifth form students at the Petit Bordel Secondary School are more comfortable now after borrowed chairs were brought to the school on Tuesday for students who have been without the furniture since school re-opened on Sept. 7.

A source told I-Witness News that Carlos James, the ruling Unity Labour Party candidate for North Leeward and some of his “campaign “associates brought the chairs to the school.

They are said to have been borrowed from a Learning Resource Centre and came two days after I-Witness News broke news of the situation and one day after students staged a brief demonstration at the school, which was quickly shut down by school officials.

“As the Ministry of Education official said, the chairs will be supplied shortly,” James told I-Witness News on Tuesday.

On Monday, Timothy Scott, an official at the Ministry of Education responsible for the supply of furniture to school, told I-Witness News that he found the situation at Petit Bordel Secondary “strange”.

“What I can say is that it is strange that there are desks at the school and there are no chairs, which is strange because the Ministry of Education’s policy is never to send desk alone; it is to send desks and chairs,” he said.

Scott said the school will get chairs as soon as the manufacture of the furniture is finished.

“It will be shortly,” Scott told I-Witness News, but did not give a time frame.

Meanwhile, an I-Witness News source expressed pleasure that the situation has been addressed.

They were, however, concerned that a member of James’ team “kept asking [the students] whose idea was it for them to protest”.

The students told the member of James’ team that it was their idea to hold the demonstration, the source said.

Meanwhile, James further told I-Witness News that the furniture situation was not unique to Petit Bordel or North Leeward and that he will visit on Wednesday (today) the Troumaca Ontario Secondary School, which has a similar problem.

One reply on “Chairs supplied to Petit Bordel Secondary students ”